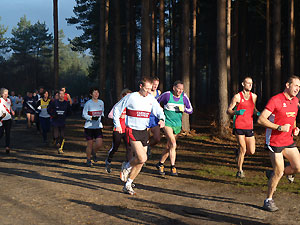 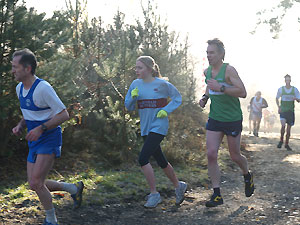 Morning mist and frost did not deter 235 runners from congregating in the Bourne for the third round of the Today’s Runner cross-country league on Sunday. Farnham Runners hosted the event for the other 16 clubs in the league. As usual, an excellent turnout of helpers offered their support to ensure a successful race.

Race director, Charles Ashby warned of icy puddles before the start of the race. Along with some sections of hard frozen ground they added to the challenge of the notorious hills this year.

Farnham Runners were delighted to claim first place overall on the day, their ladies’ team placing first, the men second. The first men’s team was Liss Runners. Fleet and Crookham AC’s ladies were runners up.

Ladies captain Jane Georghiou was surprised to be 3rd, while Sarah Edson made a superb effort despite recent injury and a cold to cross the line 6th of the 77 lady finishers. New member Angela Epps made a very impressive debut (12th), pushing out Jo Edson (14th) from the team score this time.

As well as the successful scoring teams, Farnham Runners entered 11 more men and 15 more ladies in the Today’s Runner cross-country race in the Bourne.

Four Farnham Runners have completed marathons during the last month:

Gemma and Matt Mitchell and Sara Wallace enjoyed the enthusiastic support of 2 million spectators (and 260 million viewers worldwide) in the New York City Marathon. They experienced the thrill of crossing the line in Central Park, Gemma and Matt after 4.48.06 , with Sara not far behind.

Andy Tweed returned to home territory for the Luton Marathon. He completed the 3 lap course in an excellent 3.36.39.