A massive number of 32 Farnham Runners took part in the first of the three evening Yateley 10 km road races arranged by Sandhurst Joggers. Conditions were good apart from high humidity and personal bests were the order of the day for the Farnham club.

There was some serious competition between the first three Farnham Runners home, which spurred them on to excellent new personal bests. Only two seconds separated Michael Rix (36.17) and Mark Taylor (36.19) as they crossed the line. They finished a fine 20th and 22nd respectively in a field of 771 finishers. Graham Wilton confirmed his recovery from injury with an excellent time of 36.43 for 7th place in the V40 category.

Dan Smith’s training showed its value in another impressive time of 37.17 (36th), while Wayne Humphries took an amazing 2 minutes from his previous best (38.51,71st). Charles Ashby, returning to full fitness, finished well under the 40 minute mark (39.35) and Nick Hill was only seconds over (40.12).

Keen newcomer Mike Young, wearing the coveted race number 1, was delighted to creep under the 45 minute target (44.52), while Christian Vaughan acquired a new PB by over two minutes 46.10. Although Malcolm Fitzsimmons wasn’t happy about his 46.28, Sara Wallace’s performance was rewarded by a new course best of 46. 29 (14th senior female). Frances Britain was very pleased with her 46.36, and yet another PB fell to Sara Fitzgerald (46.46). Stuart Edgoose’s 47.46 earnt him 6th V60 place. 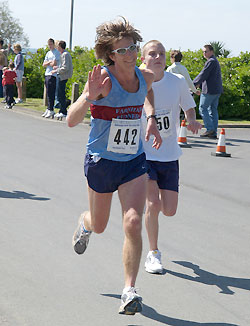 Stuart Morgan took one second from his personal best in his favourite Bognor Prom 10K (37.14) and was a splendid 14th finisher and 3rd V40 of 1300 entrants.

Tim Cummins was delighted with his new sub 45 minute PB (44.48). Lindsay Bamford’s 47.15 (24th of 387 ladies) could have seen Farnham Runners ladies repeat their team victory of last year if there had been a third club lady!