Rod Stewart made a surprise appearance at the Farnham Runners (fancy dress) Club Handicap race, just as Ronnie O’Sullivan had done at the Alice Holt race in September. He was happy to be photographed for the Herald but declined an invitation to sing after the race.

A motley crew of twenty-one club members assembled on the Bourne Green, all hoping to beat the time predicted by Madame Georghiou’s crystal ball and claim the trophy. They were all raring to start the 4.25 mile race, undeterred by the dismal weather or warnings of deep puddles in Dene Lane.

Benita Mayhead was a jubilant and deserving winner who improved her time from last year by over 2 ½ minutes; her costume suggested she had rushed to get to the start in time. The trophy will be presented to her at the Awards Dinner in January.

Last year’s runner up Tim Cummins stormed to the finish to take second again but in a faster time this year. Simon Burgess who came third was ahead until his dog, fully kitted out for the occasion in Farnham Runners gear, needed an urgent stop. 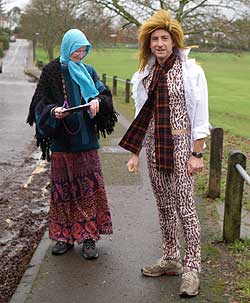 Next was the fit Rod Stewart whose looks belied his 61 years. Howard Inns accepted the first fancy dress prize on his behalf.

Despite a fifteen-minute gap between first and last start times, twenty finished within four minutes of each other with lots of personal battles going on in the last section of the course. Michael Rix recorded the fastest time of the day in 25.47 with Dan Smith in 26.01 and Steve Kitney in 26.57.

Mulled wine and mince pies provided in the club house after the race helped the Runners to mull over their performances and discuss tactics for next year.