The Farnham Runners fancy dress Club Handicap race is a club tradition going back over twenty years and all twenty eight contenders were theoretically in with an equal chance of victory despite a fourteen minute difference between first and last start times. A whole range of characters assembled on the Bourne Green – from an angel, a fairy and a baby to pirates, skeletons, an escaped convict and Scrooge. 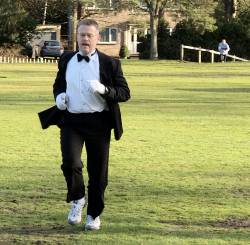 This years’ winner was already dressed suitably for the awards dinner in January when the trophy will be presented. Hillary Carter, no doubt fortified by sips from his hip flask, ran the 4.25 mile course a full three minutes faster than his predicted time. Twenty seconds behind came Clive Jones with Paul Beesley third. First lady home was Emma Doven with Shirley Perrett just five seconds behind her.

Cruella De Ville (aka Jo Edson) accompanied throughout by a surviving dalmation, (Nika) stole the show in the fancy dress competition.

The fastest time of the day was recorded by Andy Eakins, who finished in a speedy 25 mins 33secs. His cave man outfit was cleverly tailored so as not to impede running and he cunningly lost his club during the race. He was runner up in the fancy dress contest. 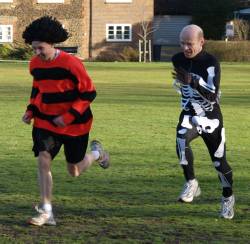 Mulled wine and mince pies were provided by social secretary Frances Britain in the club house after the race.

The club London marathon places were given to members who were rejected in the ballot but who have supported the club in league races: Bob Brimicombe (15 races), Richard Sheppard (13) and Helen Cathie who equalled Emma Doven on number of races but won her place in a draw.