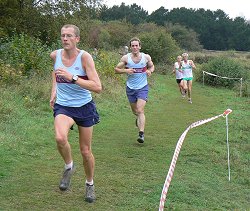 A contingent of nineteen Farnham Runners travelled to Farley Mount near Winchester for the start of the Hampshire cross-country season.

The ladies fielded the most successful team ever for the club in this highly competitive first round, coming 8th out of all the clubs in the league while their veterans’ team placed 4th.

Looking incredibly sprightly after their Loch Ness marathon only six days before, Dan Smith (90th, 34.06) and Steve Kitney (119th, 35.33) took first and third club places. Veteran Charles Ashby, who seems to have lost none of his fitness despite a lay-off through injury, was sandwiched between them (111th, 35.07). On his cross-country debut Andy Eakins tried to maintain his fast early pace over the 9km three lap course to finish a very useful 134th in 36.04. Terry Steadman (170th, 38.18) battled for the final team place that placed 6th in Division Two.