Home » All press releases » Yateley 10K and other events

Yateley 10K and other events

An excellent set of results for Farnham Runners in the Yateley Road race series bodes well for the club’s fortunes in the forthcoming Hampshire Road League events. Announced as the team with the third highest number of participants in the final race, the club also boasted two prize-winners in the series.

After completing the gruelling “Welsh 3000s” only five days previously Dan Smith (37.31), Charles Ashby (37.51, 13th M40) and Steve Kitney (37.54) all exceeded their own expectations by racing close to their personal bests.
Mike Ashworth’s chip time pushed him under 40 minutes for the first time (39.45), while Andy Eakins showed his potential with 40.14 in his first race in club colours.

Sarah Edson was 13th lady out of 228 with an excellent new personal best of 40.13 which ranks her 23rd in 2007 National Under 23 tables for this distance She was a well-deserved but surprised winner of the third senior lady prize for the series.
Colin Addison and Steve Gillingham had to settle for 40. 44 and 40.56 respectively while Andy Tweed equalled his recent PB with 41.25. Terry Steadman recovered astoundingly well from his trip to Wales, finishing strongly for 42.17 (12th M50), overtaking Jane Georghiou (42.29) who took 2nd W45 slot in the series. Angela Epps was close on her heels for a new PB by one minute (42.42) and 5th place in the W35 category.

Notable in the first race of the series Stuart Edgoose’s splendid time of 52.17 places him currently 11th in National M75 rankings. 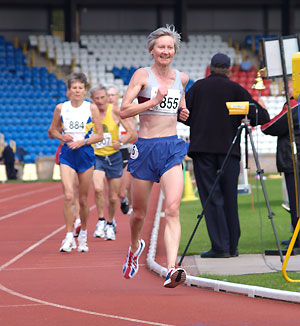 Illustrating the variety of interests within the club on a single recent weekend members completed the following events: