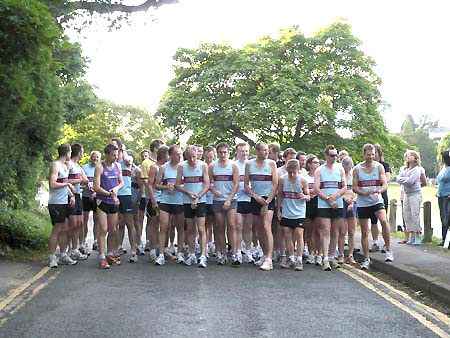 The tough Farnham Runners Club Championship this year attracted fifty, equalling the record set last year. The route of approximately 10km circumnavigates the Bourne Woods, then a steep up and down off-road section deposits the runners on another challenging road section before the final stretch across the Bourne Green. Supporters turned out in force to encourage all the finishers and enjoy the post race BBQ and presentations.

First to elicit cheers were the duo of Mark Taylor and Charles Ashby who had been locked in a close but good-humoured battle all the way round. It was only on the last sprint to the line that Ashby conceded to his younger teammate. Without electronic timing a one or two second time differential was hard to judge, but a photo at the finish indicated the latter. Taylor’s excellent time of 37 mins 14 secs won him the senior men’s trophy, while Ashby took the veteran trophy in 37.16. This was the fourth fastest for this veteran category since records began in 1991, all the more remarkable because, along with Dan Smith, he had already been round the course to mark it out and it was marginally longer this year to avoid other activities on the Green. Steve Kitney kept in the picture for this category with an impressive 37.53. Although not in top form new member Matt Nutt (38.21, second senior) held off Ian Carley (38.25) and another valuable newcomer Mike Smith (38.31). Bob Brimicombe (39.21) and Dan Smith (39.59) also clocked sub 40 minutes.

Chairman Dan Smith presented the awards and thanked all those who had helped to make the evening so successful, including marshals, timekeepers Elaine Ashby and Nicola Kitney and social secretaries, Jo Staples, Jenny Andrews and Chris Lyne.