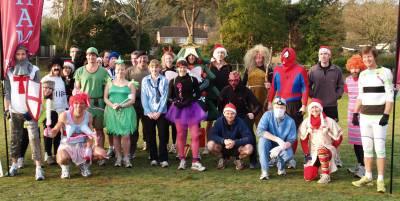 There were a few surprised motorists on Sunday as twenty-seven Farnham Runners in fancy dress made there way around the club’s traditional post Christmas Club Handicap course. As this was a handicap race all were in with a chance of winning the trophy to be awarded at the dinner in January. A fifteen-minute gap between first and last start times for the 4.25 miles was accepted with little dissent this year from those faster runners set off near the end, although there were murmurs that recent “man-flu” would affect performances.

An imposing “Spiderman” figure stormed round the course to finish two minutes ahead of his expected time calculated from his races during the year. Serious training had helped Richard Sheppard to his success. “That was the first race I have won since an egg and spoon race when I was 8” he admitted later.

Despite being given a supposedly stiff handicap, next on the scene was last year’s winner Hillary Carter in surgeon’s outfit. Steve Kitney (3rd), Bob Brimicombe (4th) and Simon Clyde (6th) all exceeded the time setters’ expectations as well as fifth placed Frances Britain, the first lady in and by far the fastest (29 mins 56 secs), the wings of her fairy costume aiding her 2½ minute improvement on her time on last year.

The fastest time of the day was recorded by Ian Carley, who adopted a female persona, hoping that this eye-catching anatomy would help him reach the line quicker. Perhaps this succeeded because he stole just two seconds (25.36) from nearest rival, the more modestly dressed Steve Kitney (25.38). Carley won the fancy dress competition with Andrew Perrin, who managed to run the course heavily disguised as a Christmas tree 2nd. Bob Brimicombe and Diane Cox as Peter Pan and Tinkerbell took joint third prize.

The club London marathon places were given to members who were rejected in the ballot but who have supported the club most in league races: Mike Ashworth (26 races), Tim Cummins (21) and Mike Walberton (17).