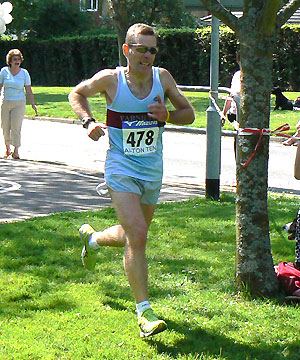 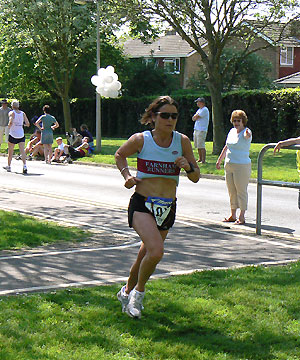 Just five weeks after leaving Farnham in snow for the last Hampshire Road League race, runners faced soaring temperatures for the 25th Alton Ten mile race. The forty-two Farnham Runners who lined up at the start all survived the course to enjoy a welcome hose down after crossing the line and claim a water bottle memento.

There were some very impressive times from three newcomers to the club while two of the ladies were among the prizewinners.

Sixteenth of the 533 finishers was Graham Wilton (photo above) who achieved a splendid result over the hilly route in the conditions. His time of 62 minutes 45 seconds placed him 7th in the M40 category. Matthew Nutt put in a superb performance on his club debut taking 23rd slot (12th senior man) in only 64.10. Michael Rix, not completely on form, was home in 65.48 for 39th place while Charles Ashby completed the A team result in 68.09 (54th). This gave them an excellent 3rd position in league Division One.

Only five seconds separated new members Spencer Ward (68.48) and Michael Smith (68.53) as they led in the B team that came 4th. Next was Steve Gillingham in 71.23. Gearing up for a significant age change, Terry Steadman sped round in 72.56 but could not hold off a late surge from Mike Walberton (72.45) for the final team place.

Farnham Runners ladies were delighted to be the second team with only Winchester AC ahead. Angela Epps (photo above) kept up a good pace throughout despite the heat to finish a fine 12th of 167 ladies and place 3rd in the W40 section with a time of 73.34. Jane Georghiou deducted 76 seconds from the W55 course record in 75.53 (20th). Frances Britain made a huge contribution to the team result crossing the line in 79.17 (30th).