Farnham Runners ladies’ A team took 2nd place at the season’s first Hampshire Road League fixture at Overton and the B team came a very creditable 4th of eleven teams in the B league division one.

Angela Epps maintained a sub 7-minute mile pace throughout the 5 mile undulating course to edge ahead in the final mile and lead in the Farnham contingent. She finished as 15th lady (5th W35) in a time of thirty four minutes 48 seconds. Jane Georghiou took 1st in the W55 section with 35.02 (16th). Completing the close-packed team result was Frances Britain who raced to an impressive personal best of 35.41 (18th, 6th W35).

Despite the hilly course many of the Farnham men showed recent improvement by achieving personal best times. Andy Eakins was close to 6 minute mile pace in an impressive PB of 30.23, with veteran Ian Carley on his heels (30.29). Charles Ashby is still trying to shake off injury (31.15) with Bob Brimicombe (31.52, PB) making up the A team that came a very creditable 7th in the competitive Division One. 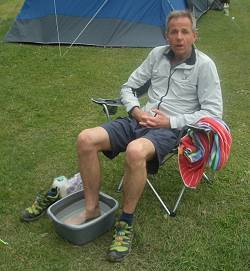 Twelve members joined the recent annual club trip to the mountains of mid Wales for an attempt to beat the Talyllyn train over a challenging 14 mile multi-terrain course.