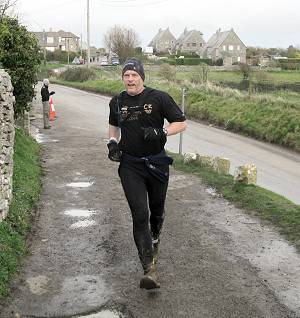 For many runners the toughest challenge is to run the 26miles 385 yards of a marathon. Yet Farnham Runners member Hillary Carter has completed 22 marathons in 2008 alone. This makes a total of 79 since he started in 1995 while living in Canada. On one weekend this year he even completed two marathons over one weekend. His total of 79 doesn’t include two “ultra” marathons of 50 or 60 miles.

Hillary usually chooses scenic off road events to explore beautiful landscapes for example the coastal trails marathons in Dorset and Devon, or to visit historic places, such as Avebury and Stonehenge, or towns of interest such as Stratford-on- Avon.

Here Hillary tries to convey what keeps him coming back to the marathon:

“There is great satisfaction in finishing, just like any event and in reaching some landmark tally or achieving a particular finish time. There is also the fascination of taking something to the extreme and exploring how much you can coax out of your body, like tuning an engine. Nevertheless, it is for the most part a harmless, inexpensive and wholesome pursuit that has its own camaraderie.”

“Once you partake of the marathon experience, it will be calling you back. So next time you are at a loss and need something to aim for, are looking for a way out of mid-life crisis, searching for a fund-raising stunt or just planning New Year resolutions to deal with those extra pounds from the season’s excess, consider signing up for a marathon, but be warned; they can be addictive!”

If you’ve ever wondered what to do with yourself on a weekend, and there must have been some during the past year as we were grounded by our damp climate, or ever pondered how to commemorate that significant birthday or other life event, – had you thought about doing a marathon?

Running must now be the most popular active sport in terms of participation and completing the marathon distance (26 miles 385yards) has become a benchmark in accomplishment for athletes of all standards. It is also a pastime that is virtually weatherproof. Invigorated by the activity, rain is repelled; the body glows with warmth, uplifts your mood and liberates you to appreciate your surroundings, whatever Mother Nature throws at you.

Media coverage of the London Marathon and other big city marathons has gone a long way to popularising the event, but while capturing the imagination of the public, this focus has also meant that the myriad of other marathon events to choose from, all around the country, often gets overlooked, and that’s a shame because there are some gems out there.

Take the one held recently on Gower peninsula in S. Wales, for example (6th Dec.). Based at Llangennith, the route followed coastal paths and lanes past such landmarks as Rhossili Bay, where people were surfing and pretty Port Eynon. You couldn’t have wished for a more exquisite location in which to run. Alright, it was muddy and frosty, but the weather that day was gloriously sunny, melting away any misgivings about the conditions. When you go on to make a habit of joining these events, every once in a while you will experience one of those flawless days that make the British countryside the very best there is, and well worth waiting for.

There are marathons to suit every taste

Gower is just one in a series of seven; one a month from November to May, all held in scenic coastal areas from Cornwall and Devon to Dorset and Pembrokeshire, organised by Endurancelife®.

Also recommended is their North Devon, Exmoor event, but these are ‘heavy duty’ runs in demanding terrain. Still only 26.2 miles or 42.2km, but they require even greater endurance and longer to complete. For those competitors more interested in finishing within a certain time than slogging it out through countryside, pick a road marathon and if you want the buzz of a big event, go for London, Edinburgh, Dublin, Paris, etc., but book early, before they sell out!

Other marathons that stay on tarmac, while also offering some scenery, would be Windermere, a circumnavigation of the lake and not too hilly; The Cornish, a run to the top of Bodmin Moor, turning round at the famous Jamaica Inn; the Kent Coastal, an almost dead flat course along the seafront from Margate; or closer to home, the popular New Forest Marathon in Hampshire.

Then there are venues of great historical interest such as The Shakespeare in Stratford-upon-Avon and The Neolithic Marathon that starts in ancient Avebury Ring and finishes next to Stonehenge, with plenty of time to contemplate their significance en-route.

The year 2008 was an opportunity to commemorate the London Olympics held 100 years ago. On 24th July a Centenary Marathon was held retracing the original route as far as possible, from Windsor Castle to White City, London. You may not have heard of this one as it was exclusive to members and guests only of the 100 Marathon Club which organised it.

The town of Hastings also put on a unique event to mark 100 years since it last staged a marathon, again in 1908. Normally, Hastings hosts a half-marathon. This year, for just once, they held a full marathon. Both events were definitely ones for the marathon collector!

If this is all beginning to sound a little crazy, bear in mind the Greenwich Foot Tunnel Marathon of 2002, to celebrate the hundredth anniversary of the tunnel and run entirely underground; 56 laps of the tunnel, starting at 2:00 am to avoid the public. A hundred runners took part.

One of the interests of attending marathons is meeting the colourful characters that seem drawn to these tests of stamina. There are the fancy-dressers, those that run barefoot, even one man who runs them backwards. Admiration must also go out to those athletes who still compete in spite of physical disability. They have no need for contrived handicaps. Finally, of course, there are those hardy individuals on their 100th-plus marathon who just keep on going. There is something about endurance running and the marathon distance in particular that seems to draw you in. You keep coming back. You get hooked.

What keeps people coming back to the marathon?

There may be as many answers as there are regulars at these events. 100 Marathon Club member Martin Bulger has compiled a book on the subject, but without pinning down the answer. Using them as a destination to explore beautiful landscapes and visit historic places is increasingly popular, but there are also nearby favourites to revisit, such as Beachy Head and the Steyning Stinger on the South Downs, and the beautiful Needles Marathon on the Isle of Wight .

There is great satisfaction in finishing, just like any event and in reaching some landmark tally or achieving a particular finish time.

There is also the fascination of taking something to the extreme and exploring how much you can coax out of your body, like tuning an engine. (We won’t be drawn here into considering that whole other world of the ‘ultra-marathon’.)

Nevertheless, it is for the most part a harmless, inexpensive and wholesome pursuit that has its own camaraderie, even within the running fraternity.