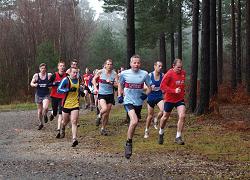 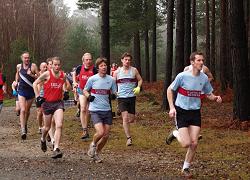 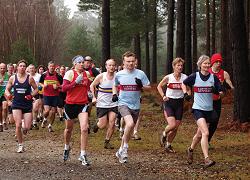 Farnham Runners race director Charles Ashby warned the 216 assembled runners before the start of the Farnham Today’s Runner Winter League cross-country that underfoot conditions were the most difficult ever experienced, as early that morning some of the course was still covered in water after the previous day’s torrential rain.

However, by the time of the race most had drained away and the surface was relatively good compared with many other races in this league. Some even complained about the lack of anticipated mud!

For the second consecutive year Farnham Runners won a convincing victory over the other 18 clubs in the league. Both men and women won their sections and each of their teams had the highest number of runners, even though the host club provided the marshals.

As usual it was the close packing of the Farnham teams that led to success. Captain Dan Smith led in his team in a fine 8th position with Steve Kitney 15th, Andy Eakins 16th, Bob Brimicombe 23rd and Charles Ashby 24th.
For the ladies new member Sarah Hill showed her mettle with her excellent 3rd place, followed by Jane Georghiou 10th and Frances Britain 13th.

Charles Ashby had recruited a group to help him set up the course and some members gave up their own chance to run by volunteering to help on the day. Relatives and friends also provided essential assistance and social secretaries Jo Staples and Jenny Andrews organised the refreshments for the hungry runners after the race. Former chairman Andy Smith took on a key role as lead cyclist while Ann Prince, one of the club’s founder members, made an enthusiastic marshal.