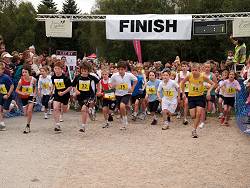 An air of nervous anticipation was apparent in the Alice Holt Forest Races, Farnham on Sunday as almost 800 runners of all ages prepared to race, many for the first time.

A real family outing, Farnham Runners staged five races ranging in distance from 60 meters to 10 kilometers. With Charles Ashby as race director, assisted by his wife Elaine, the event is growing in popularity each year with 150 more runners than in 2008.

The local Barfield School played a major role this year entering over 50 competitors and providing volunteers to organise the car park and a water station. Teacher John Milne undertook the challenge of completing the 10km course to raise funds for a new sports hall at the school by inviting sponsors to guess his finishing time.

St. John Ambulance was on hand for any first aid needed. Alton Sports, who have recently opened a new shop in Farnham, manned a stall while Abigail Ashby and 1st Bourne Guides sold tea and cakes.

Local Runners were well-represented among the prize winners, though the event attracted participants from a wide area. There were outstanding performances from many youngsters and the race organisers hope that their success will encourage them to continue with the sport.

The 10km race was won in a superb new record time of 32 minutes12 seconds by Toby Lambert of Alton Sports, representing Winchester Athletics Club. He finished over 4 minutes ahead of second placed Tad Dicker (36.03, first in the M40 category) from Fleet and Crookham AC.

For the ladies Farnham Runners veteran Sarah Hill took the honours in an excellent time of 38.20 over the hilly terrain, with Sarah Rollins of Aldershot, Farnham and District A.C following in 39.08. Farnham Runners won both team events with Hart Road Runners second, the men’s team by the narrowest of margins.

Juniors stole the show over the seniors in the 5km race, Matthew Brown of AFD clocking a spectacular 18.04 and thirteen year old Eleanor Harrison recording a splendid 20.29, her mother Susannah 5th lady in the 10km.

The Epps family could celebrate their success with sisters Cydney and Evie winning the 3km and 1km respectively and mum Angela placing among the 10km prizewinners. Close on Cydney’s heels (her time 15.29) were Ruby Conway (15.31) and Grace Carley (15.32) while Gemma Lenthall (5.22) and Isabelle Adams (5.28) were second and third 1km finishers after Evie (5.17).

All were cheered on by enthusiastic crowds but it was the under fives 60 meter dash that drew the greatest support and everyone who took part was a deserved winner.