Farnham Runners men and ladies teams stay high in the Hampshire Road Race League first division at the halfway point in the series. The ladies are joint third and men fourth after the sixth race, the Stubbington Green 10km. Although more undulating, the new scenic course got a “thumbs up” from most runners and some Farnham Runners posted new personal best times, a few by a huge margin. Two of the veterans were first in their categories.

Michael Rix was first Farnham man home in 36mins 29secs a minute quicker than his last year’s time, and with a much higher position of 28th of 744 men. Mike Anderson showed his class with an outstanding 36.55 to take the M50 first prize. In a new personal best of 36.59 Ian Carley almost caught him (8th M40). Dan Smith’s fine 37.14 gave him 4th in this team that placed 6th in this very competitive race and 5th in the HRRL top flight. 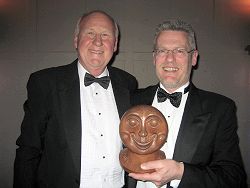 The annual dinner dance and awards presentation is a popular event in the Farnham Runners calendar. Chairman Dan Smith remarked on a very successful year for the club and thanked Jo Staples for organising the evening before presenting the awards.

Graham Wilton won the Paul Charlton Memorial Trophy for the quickest marathon of 2008 for his time of 2hours 49mins 44secs in London.

Richard Sheppard is now the proud owner of the Club Handicap Trophy, while the unsuspecting Hillary Carter and Shirley Perrett were awarded the Herbie and Prince Memorial trophies respectively for improvement between 2007-2008 in the Alice Holt 10km race.

David Georghiou was the very deserving winner of the Steve Parker Trophy for the person who has contributed most to the club over the year for all his hard work as the club’s webmaster.

Bob Brimicombe and Mike Ashworth were presented with special trophies for their dedication to club results by taking part in all 26 club designated Grand Prix races in 2008, a huge achievement.

Back from the Portland Coastal marathon that day, Hillary Carter received the club “Smiley Award” for completing an incredible 22 marathons last year. 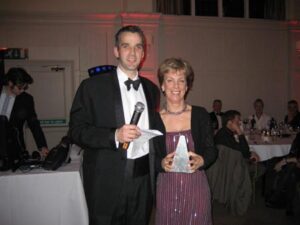 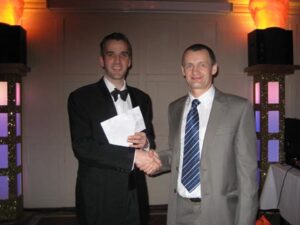 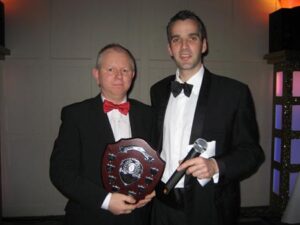 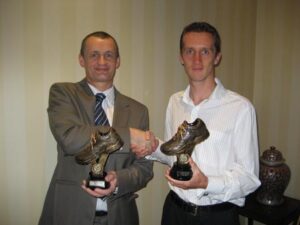