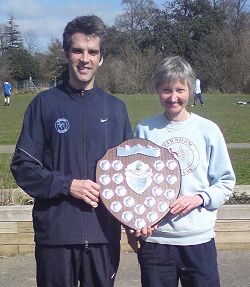 A jubilant Farnham Runners carried off the Today’s Runner Winter League shield for the 2008-9 series after 3 consecutive years as runners up. This entitles them to a place in the National final at Halifax on 19th April.

They battled against eighteen other clubs in the area competition over the season and their men’s team took an outstanding top slot in all five races. This helped the overall team to first place 4 times and second place in the final match, but by then their victory was secure. The ladies were first in one race, second in three, and fifth in the last.

Denmead Striders hosted the final round at Staunton Country Park. The course was relatively flat apart from a steep rise to the finish but was not without its mud despite the recent dry spell.
In the final throes of his preparations for the Paris marathon Michael Rix was half way home before many had finished, having led in the club in 4th position. Ian Carley in 6th was never far behind. A tussle between Charles Ashby (11th), Dan Smith (12th) and Steve Kitney (15th) was won on the line by a determined Ashby. This gave an unbeatable total points score of only 48.

After nine races of the Hampshire Road Race League Farnham Runners men’s and ladies’ teams look safe in the top divisions, the men lying an excellent 4th and the ladies 7th. Both are looking to improve on these positions in the closing three races.

The Salisbury ten-miler was scenic and relatively flat, along the valley of the River Test and some Farnham Runners produced personal bests despite the gusty wind.

Twenty members also ran in the Fleet half marathon, led in by Julian Mann (85th of 2105, 1.23.04) in yet another personal best. Graham Wilton and Ian Carley, both timed at 1.25.59, were reported to be chatting as they tested out their anticipated marathon pace.