Farnham Runners took three more prizes in the second of the Yateley 10k series, with many spectators amazed that anyone could race on what was reportedly the hottest day of the year so far. Times were down on previous attempts but Michael Rix impressed with a 36 minute 28 second time for 10th place of 770 finishers. (All times given are chip times.) Next for Farnham Ian Carley was 3rd in the M40 category with a speedy 38.17 (25th) while Julian Mann, first veteran in the first race, had to be content with 39.06 (8th M40, 39th).

Steve Gillingham, as reported on the “parkrun” website was the “runaway winner of the men’s points competition” at the Basingstoke 2008-2009 5 km Saturday morning time trials.

He completed 45 of 51 possible events and helped with two more. His total of over 4000 points was a massive 798 ahead of the next runner and he received memento and enough sports drink from sponsors Lucozade Sport to keep him going for a quite a while. 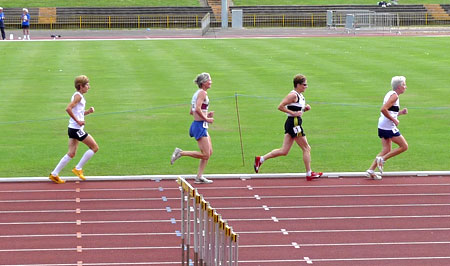 Jane Georghiou finished 4th W55 in the 5km at the British Masters Track and Field Championships in a time of 20.53.