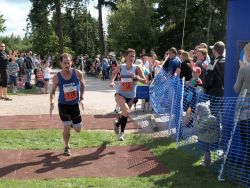 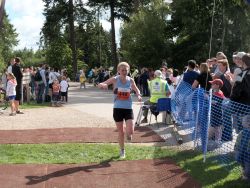 A bright sunny day added to the feel good factor for all those who took part in and helped with Farnham Runners annual Alice Holt Forest races. While the main race remains the 10k, for the fourth year there was also a 5km as well as junior 1km and 3km fun runs and the popular “60 meter dash” for the under fives.

With costs rising for use of the Forest, sponsors become even more essential. Local companies stepped in to back the events as follows:

Local Barfield School provided volunteers to organise the car park and a water station whilst the British Red Cross was on hand for any first aid needed. Alton Sports and East Street Cycles had stalls with Bourne District Guides selling tea and cakes. Anna Sheppard and Kim Mepsted gave pre and post race massages. Jonathan Jones, the town crier started them all off.

Among the entrants were familiar names as many return year on year to take part. Local runners were well represented, though the distance that some travel to take part underlines its popularity.

With his usual expertise Charles Ashby assisted by his wife Elaine managed the events on the day after months of preparation. This year for the first time FR Systems were employed to provide chip timing and Sussex Sports Photography took official photographs. Numerous Farnham Runners, their families and friends gave generously of their time to ensure the success of the ambitious programme of events.

Many families made it a whole day out, picnicking as they eagerly anticipated whether they had won any of the magnificent display of trophies on offer.

Julian Manning of Denmead Striders won the 10km in 34 minutes and 34 seconds, just ten seconds ahead of Justin Phillips from AFD (34-44). Chris Beecham, third and first in the M40 category was also under 35 minutes (34-58), no mean feat over this hilly course on forest tracks.

First lady to cross the line was Charlotte Collyer in 39-12, a remarkable achievement as this was only her fifth race and she had won a tough marathon the previous week. Two Farnham Runners ladies gained podium places, Sarah Hill second in a splendid time of 39-55, followed by Emma Whittaker-Axon third in 42-05. 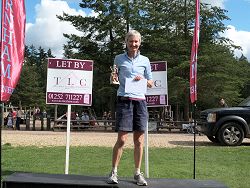 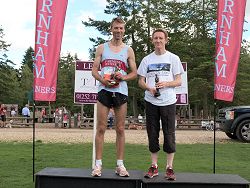 In the 10km team events Farnham Runners men and ladies both came out on top, with the ladies also taking second place and the men third with Haslemere Border AC ladies third and Hart Road Runners men second.

In the 5km, juniors stole the show over the seniors with Aldershot Farnham and District runners to the fore, taking both team prizes. Jordan Fox clocked 19-08 while Bethany Gibson was first female in 20-59 and was fifth finisher overall.

Nathan Gibson of AFD won the 3km race for 9-12 year olds but it was South Farnham School that won the male team event. Second over the line was Molly Pocock of AFD, helping her team take the honours for the girls.

A spirited run from Charlie Dawkins of Barfield School secured him first place in the 1km for 5-8 year olds while Harriet Cope beat the other girls. Barfield School and Bourne School won male and female team prizes respectively.