A record of 52 members finished the 2010 Farnham Runners Club Championship. The traditional hilly multi-terrain course of approximately 10 km challenged the fitness levels of experienced and newer runners alike, especially on a hot and humid evening. Competition was keen for most of the eight age group awards on offer. 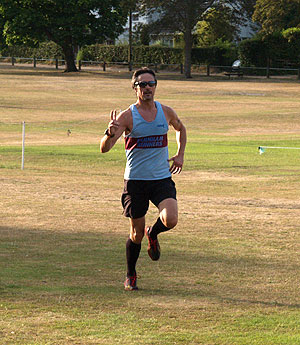 A leading pack of five men soon split to give three at the front. Then towards the end of the first mile winner and top senior for the third time, Michael Rix (photo above) established a further gap to cross the line the 6th fastest since the event began, recording 35minutes 59 seconds. Ian Carley, who won the tussle for first veterans’ place, accelerated ahead of Andrew Ellison on the steep downhill section through the woods. Carley clocked 36-30, the second fastest V40 time on club records with Ellison (36-38) now 3rd. Charles Ashby as 3rd V40 in 38-29 kept ahead of the second senior James Ogilvie (39-38), while 3rd senior was Nick Hitchcock in 41-49.

Scott Salmon stormed round in an impressive 41-56 to be a delighted winner of the V50 shield. Other hopefuls who will have to wait another year included Mike Walberton (43-42), Terry Copeland (44-02), and Rob Murdoch (45-52). With no-one contesting the M60 trophy Terry Steadman holds on to it. 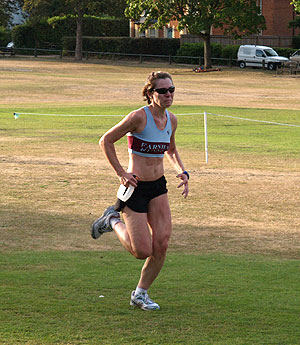 Gabi Hitchcock (photo above) led out the ladies from the gun and none could catch her. Her strength and determination showed through and she was a deserved champion of the ladies and the senior trophy winner in 43-23. Second senior lady was Suzanne Munton (51-11) and third Emma Drinkwater (52-17).

The following results show the high level of enthusiasm from a wide range of members to push themselves over this tough club event.

The whole race was expertly organised by race director Charles Ashby and there was excellent marshal and helper turn-out. At the prize-giving chairman Dan Smith also thanked all those who helped prepare the popular post-race BBQ.