Farnham Runners enjoyed a busy weekend with a Today’s Runner Winter League race at Manor Farm Country Park near the Hamble estuary the morning after their annual Awards Dinner.

The Annual Awards Dinner was held at the Frensham Pond Hotel thanks to organisation and hard work by social secretaries Sylvia Harper and James Finney, chairman Steve Kitney and secretary Elaine Ashby. Nick King of Blue Dog Productions provided resources to give a professional back drop. Member Terry Copeland was on hand to photograph the evening’s proceedings.

After the dinner chairman Steve Kitney gave a brief resume of the wide range and number of events that the club has organised or taken part in over the last year and noted the very healthy continuing increase in membership of the club, before the presentation of the awards.

For the third year running Michael Rix won the Paul Charlton Memorial Trophy for the quickest marathon time of the year (2-47-50).

This year there was a new trophy for the fastest ladies marathon time, which was presented by Jane Georghiou to the very deserving winner Sarah Hill, who recorded the first sub three-hour ladies club time in the 2011 London Marathon.

The Prince Memorial Trophy for ladies’ improvement in the Alice Holt 10km race between 2010 and 2011 went to a delighted Shirley Perrett.

The Herbie Memorial Trophy in memory of former chairman Ian Herbert went to an even more jubilant Peter Strange.

There were three nominations for the unique “Smiley” memento but a popular winner was Sue Boxall for her amazing array of colourful running outfits.

The evening was rounded off by some enthusiastic disco dancing to Soundz Unique. 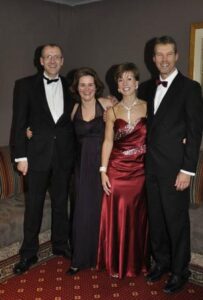 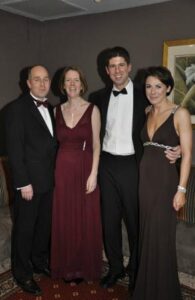 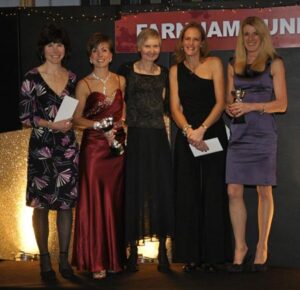 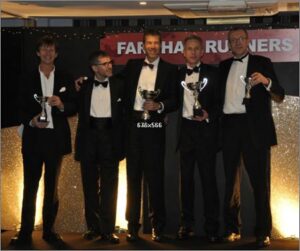 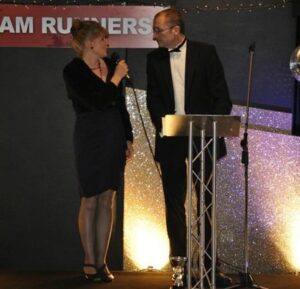 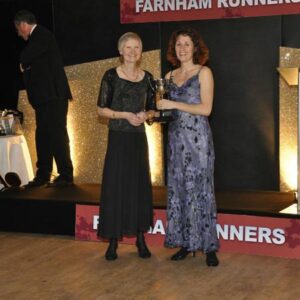 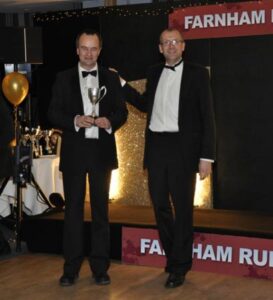 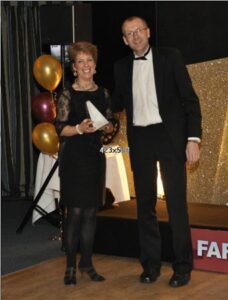 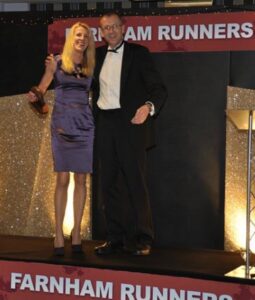 There were a few bleary eyes among the seventeen intrepid souls who braved the cold snap and the mud for the fourth event of the series and add to the club’s lead at the top of the table.

Ian Carley and Andrew Ellison were neck and neck until half way when Carley pulled ahead for 5th with Ellison finishing just two places behind in 7th. Charles Ashby had to be content with 12th, followed by Mike Anderson in 15th and Charlie Hill-Venning 21st. The close packing of all five scorers ensured victory for the men. They were backed up by John Hill-Venning (32nd), Bob Brimicombe (37th), Nick Hitchcock (64th), Tim Withers (80th) and Bruce Peto (160th).

The ladies could not repeat their win of the previous race but came a very creditable third. Susie Chan, recently chosen by a compression clothing company 2 XU to be an ambassador for their brand, made an impressive debut in the league with an excellent 7th place. Gabi Hitchcock gave her all for 12th while Jane Georghiou still made the team in 17th with Lindsay Bamford never far behind in 22nd. Christy Roxburgh (35th), Nina Muir (46th) and Elaine Ashby (72nd) gave support.