Some excellent team results at the Alton Ten miler have helped Farnham Runners mens’ team prospects of promotion back to Division One of the Hampshire Road Race League, while the ladies boosted their hopes of remaining in the top flight. On the first weekend of sunshine and no rain in many weeks the club entered a total of twenty-five runners.

The men’s first team came 3rd overall and top of Division Two of the league. Leading them in, Andrew Ellison made an impressive debut on this hilly course to take 3rd place in the M40 category in one hour 55 seconds, 21st of 450 finishers. With him till over half way was Ian Carley who clocked a personal course best of 1-01-34. Unsure about a recent injury Charles Ashby (1-05-35) started steadily but felt good and so later turned on the gas to record a 3 minute “negative split”. Jason East was close behind in 1-05-45.

Gabi Hitchcock, although she could not quite match her time last year was pleased to clock 1-12-57 for 14th ladies place after minimal time for training. Wendy Carley in 1-23-34 and Tori Shaw in 1-28-49 gave the A team a very useful 6th in league Division One (9th overall). Elaine Ashby and Claire Pengilley both clocking 1-32.00 added to their impressive string of new personal best times. 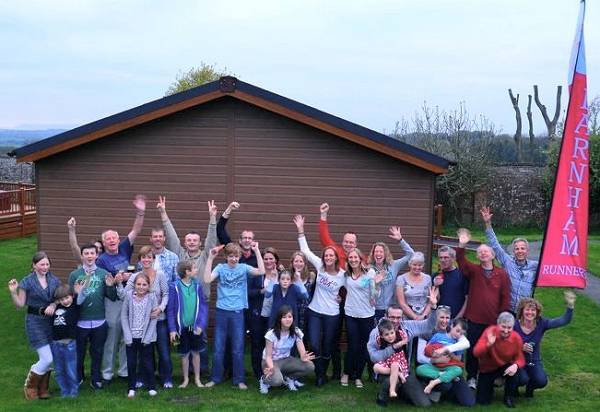 On the Sunday of atrocious conditions – cold, gales, heavy rain – four made the courageous decision to start the Milton Keynes marathon and all not only survived but amazingly recorded personal best times, even though the course was 0.23 miles longer than the normal 26.2 miles to avoid floods!

Not so “lucky” were Hillary Carter, Jane Georghiou and Peter Strange, who found themselves lined up at the start of the Stratford marathon to be told that the race would only be a half marathon as a section of the full route was under water. Although disappointed, all three agreed this was the right decision given the dire conditions.