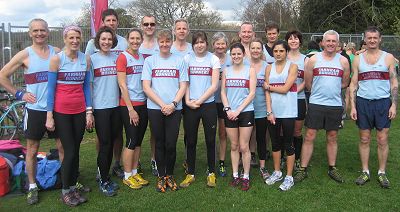 Farnham Runners were out in force at the final round of the Today’s Runner Winter League cross-country at Staunton Country Park, organised by Denmead Striders. They put out the best ladies’ team since 1990 and a winning men’s team for the 5th time this season to clinch first place overall on the day. With one race of the series to be discounted they were certain to come out on top, their third series win in four years, even without this final victory. There was great disappointment when they found that they could not officially be crowned champions, as the previous year’s winners had not returned the trophy.

For the ladies Laura Boon flew over the mud for an excellent 2nd place, on the final few yards just getting the better of new member Tamara Dutt in 3rd, who without the benefit of studded shoes still made a remarkable debut in this league. Gabi Hitchcock underlined her present form for another fine 4th place. This team could not be beaten.

In the ranks of non-scoring places were Jane Georghiou (9th), Lindsay Bamford (16th), Sue Boxall (22nd) and Christy Roxburgh (23rd). Farnham’s youngest member Abigail Ashby sprinted to the finish for a fine 30th, while Elaine Ashby overtook four ladies on the final hill for 42nd, with Catherine Dutt just two places behind on her debut.

Ian Carley led them in with an excellent sub hour time over the undulating course (59-55). Andrew Ellison had good reason to be pleased with his performance (1-01-00) while Mike Walberton was delighted with a personal best by 40 seconds (1-03-52). Bob Brimicombe completed the A team score with 1-05-01 to help the squad to 2nd on the day in Division Two. Lying 3rd on aggregate they need good scores at the final three races to secure promotion.