After a three month break from any league events, Farnham Runners were out in force for the first Hampshire Road League race of the season. The two lap Overton five miler took place on a warm sunny afternoon. A couple of steepish climbs were partly compensated for by long gradual descents.

Fifteen of Farnham’s men competed for the twelve team places. Out in front came the ever improving Stuart Morel who chopped another minute from his personal best, despite the undulating course, to record 29 minutes 50 seconds, 40th of 495 finishers and 5th in the M45 category. James Clarke and James Warren showed they were getting back to form in 30:04 and 31:09 respectively while Mike Anderson took 4th M55 slot in 31:35. This “A” team came second in Division Two. Morel and Clarke were two of the members who chose to race on two consecutive days, having posted good times in the previous day’s Alice Holt 10km.

It was left to Jane Georghiou to lead in the ladies in 37:26, followed by Vicki Clarke in 38:27 and Mary Denise Fitzgerald in 43:10, just a fraction ahead of Tina Harrison, who was given the same time. Cyra Parkes (45:39) and Clair Bailey (50:06) were delighted to contribute to the B team. After promotion last season, the “A”s placed ninth of ten, while the “B”s came tenth of fourteen, both in their respective Division One. 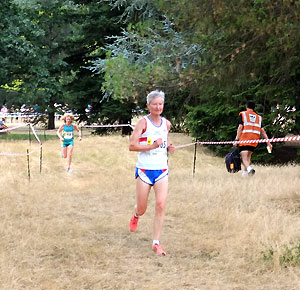 Jane Georghiou represented Great Britain at the World Masters Championships in Lyon France and came away with a silver team medal for the W60 cross-country. She was second in this GB team and 10th in her age group.

Sarah Hill triumphed in the Police Sport UK Ten Mile Championships at Deepcut, Surrey, where she kept a convincing lead of over a minute ahead of the second lady. Despite the challenging undulating course in warm conditions she clocked an excellent time of 1:01:50.

Kay Copeland came second and posted her best time of 49:40 in the final of the three-race Yateley 10km series to clinch third place in the series for her age group.