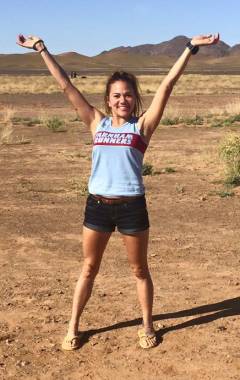 Susie never fails to astound her friends and fellow members of Farnham Runners with her boundless energy and enthusiasm, always smiling even during the most gruelling of races.

The Marathon des Sables or MdS is a five stage foot race across 156 miles of the Moroccan Sahara desert, over a route that changes every year. Each participant must carry his/her own backpack containing food, sleeping gear and essential survival kit. Everything except water that they need to survive. A rudimentary shelter, described by competitors as a blanket with sticks, is provided to sleep in at night and is shared with up to seven other competitors. Started by Frenchman, Patrick Bauer, in 1986, this year’s race was the 30th. “No one can deny that finishing the MdS is an incredible accomplishment. But more importantly, you will walk away with a new slant on life – that you can achieve anything you set your mind to do” states the race website.

This year, as usual, temperatures often soared well above 40 degrees and there were the inevitable sandstorms to deal with. Great planning and care has to be taken to avoid blisters from running in the sand.

The amazing Susie only started running in 2011. In the same year she ran her first race, finishing as 7th lady and second in her category in the Farnham Pilgrim’s half marathon and joining Farnham Runners.

It wasn’t long before she showed a keen interest in ultra-running events. She completed the 70 mile 2 day Isle of Wight ultra. She went on to run the gruelling Pilgrims Ultra 2013 – 66 hilly miles along the North Downs Way from Farnham in two days, sleeping on a school hall floor at the end of the first day. “The weather was freezing…. But you can’t have it all. I loaded up my rucksack to a similar weight I would have for the mid-section of the MdS, around 16 lbs”, she wrote on her Blog: http://www.i-run.co.uk/category/blogs/athlete/susie-chan/

She successfully completed the 2013 MdS with an impressive placing. She explains “It sounds like a crazy race, but anyone with the right approach can do it. They organisers want you to finish, they look after you and keep you going. They check on you and cheer you. The camaraderie of fellow runners is like nothing else I have ever experienced in any race I have done. You are all in it together. The scenery is sweeping, epic and so beautiful it is almost surreal. Even with sore feet, starving hungry, it was the best feeling.”

Last Spring she completed a trio of events in close succession. She started with the 2014 London marathon and eight days later recorded a fast 3-35-19 in the Boston marathon. Less than two weeks after this she undertook her first non-stop 100 miler, the Thames Towpath 100, raising sponsor money for the Farnham charity “ Disability Challengers”. She commented that the 100 miles was a mental battle and she finished elated, but very tired in 24hours 58 seconds.

Fellow Farnham Runners are often inspired and exhausted in equal measure on hearing about her exploits! She still finds time to compete with excellent times in some of their league races.

This year all her meticulous planning and dedication to training paid off with an astounding MdS result. She ran the two stage 91.7 kilometre fourth day in 14 hours 27 minutes, finishing at 10.30pm in a sandstorm. She says “The endurance training paid off and I broke the top 10 females on the dreaded 91k long stage, and was 11th on the marathon stage. I finished 13th and ranked elite at 174th overall out of 1300+”

But it didn’t end there for Susie! After the finish, boyfriend and fellow MdS finisher, Shaun Marsden went down on bended knee for a romantic proposal in the desert which she accepted!

On returning to UK her feet have barely touched the ground with an appearance on BBC’s The One Show with Shaun two days later.

Congratulations all round for this amazing lady!