Farnham Runners annual Handicap race has been held since 1986 and on the same course as today since 1990. It remains a popular event in the club calendar. Nowadays a powerful computer using complex algorithms and state of the art software calculates the times at which the runners set off around the 4.25 mile route. This year there was a gap of 18 and a half minutes between the first and last to start, yet they all finished within five minutes of each other. 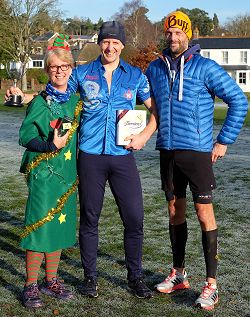 A delighted winner was Barney Whiter, who proclaimed he hadn’t ever won anything before, not even a game of conkers! He is now the proud keeper of the coveted trophy for the year.

The first three to finish (see photo) were also rewarded with boxes of chocolates. One of the last to set off was Rob Gilchrist and he overtook all the way round for a worthy second place. Helen Bracey and Shirley Perrett were thrilled to lead the race for most of the time, Shirley’s strong sprint finish clinching third, just ahead of Helen.

The fancy dress competition, for which boxes of chocolates were also presented to the first three, was no less hotly contested and judges Tina Harrison and Cyra Parkes undertook a difficult task.

There was the usual diversity of costumes, a number taking a Christmas theme – some elves, two trees and some Santas, both male and female. Two monks kept proceedings peaceful, with the devil, the Worst Witch, Darth Vader and a convict to be kept in check. Prince Charming, a handsome cowboy, a ringmaster, a snowman, a penguin, a Kung Foo Ninja and a Where’s Wally character all made their presence felt. The Farnham Runners cheerleader was on hand to spur on those dressed cunningly as runners. 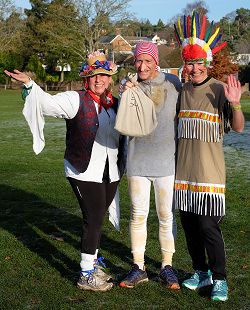 Three caught the eyes of the judges (see photo):

Race director Craig Tate-Grimes, who had prepared the course, presented the prizes and thanked all those who had helped. Post-race mulled wine was provided by Helen Bracey.