A chilly but gloriously sunny day cheered runners on their 10 miler at Salisbury, the ninth event of twelve in the Hampshire Road League. Voted into the “top 10 best UK ten mile road races” in Running magazines the scenic route follows the banks of the River Avon through the gently undulating Woodford Valley, with fine views of the cathedral spire on the return leg.

Fifteen Farnham Runners supported their teams, the men having A, B and C squads with four to count in each and the ladies A and B with three counters apiece.

Farnham’s A squad men gained another three points against rivals Portsmouth Joggers in their bid to head Division Two, both clubs looking safe for promotion at the end of the series. James Warren led in the men with a fine new personal best 1 hour 53 seconds as 34th finisher of over 700 to place 10th in the M40 category. Next were strong team members James Clarke in 1:01:14 and Stuart Morel in 1:01:55, with Charles Ashby making a very worthwhile return to racing as final A counter in 1:04:18.

Promotion to B Division One for the C team that lies fourth is still possible as three races will be discounted at the end of the season. At Salisbury the incomplete team of three placed 12th of 17 in that table: Peter Chapman PB 1:17:13, Geoff Brown PB 1:17:52 and Alistair Hardaway 1:21:48.

The ladies are safe in the top division at fifth slot, though coming ninth of ten on the day. Kayleigh Copeland gained a new personal best of 1:16:56, followed by Tina Harrison PB 1:22:21 and Mary Denise Fitzgerald PB 1:26:03, while Kathy Brown (1:46:37) was unsupported for the B team that lies 9th of 14 clubs 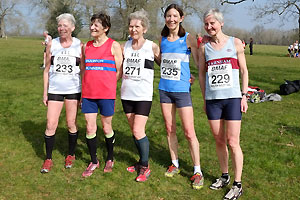 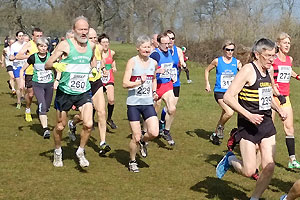 Jane Georghiou represented Farnham Runners at the British Masters cross country championships at Bath, taking 5th in her category over the 6km course with a time of 26:49.