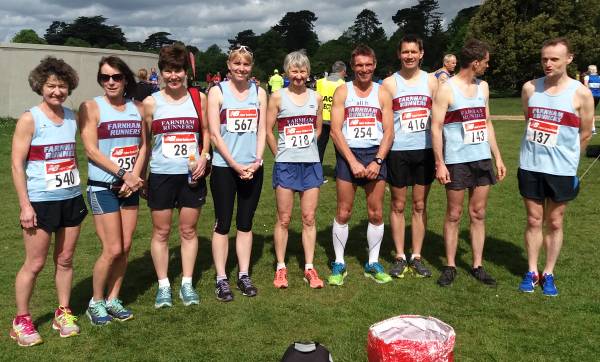 Fifteen Farnham Runners supported their club in the penultimate event of the Hampshire Road Race League season and were rewarded with some valuable results, eight of them achieving top ten age category placings among the 500 finishers.

The ladies fifth place on the day moved them up to sixth out of the ten teams in the top division. Their B trio came fourth of fifteen which gives them hope of staying in B Division One after the final round, the Lordshill 10km. The men’s A squad were pleased with eighth of ten on the day in Division One while the Bs were tenth of fifteen.

James Clarke was first back for the local club in an excellent 37 minutes 3 seconds for 23rd place over the slightly undulating three lap parkland course. Next Andrew Ellison came third M45 in 37:51. Neil Ambrose and Tim Cummins put in strong performances for 41:38 and 42:02 respectively. On his heels but pushed into the Bs was John Phillips with the same time as Cummins. Alistair Hardaway’s time of 42:17 for tenth M50 was identical to his time last year as well as a 10km in January. Chris Cramp was encouraged by a time only eleven seconds shy of his personal best, just two weeks after running the Shakespeare marathon. Keith Marshall was fourth M55 in 44:15, while Geoff Brown supported the team in 46:21.

The following week James Clarke chose the tough, hilly Dorchester Marathon as his first attempt at the distance and finished an impressive eighth in 3:06:39 on a very warm day.