In probably the toughest conditions since the event began in January 1988, shortly after the formation of the club, Farnham Runners hosted the third round of the Southern Cross-Country League on Sunday, in woods near the Bourne Green. Forecasts were for heavy rain, wind and bitter conditions and were not wrong. Further north there was snow.

Under the expert guidance of race director, Craig Tate-Grimes a huge number of members, relations and friends gave up their time to help in the preparations, including marking out the course and marshalling on the day.

Georgi Welch, social secretary enthused others to help her make gallons of soup for the hungry hoards after the race, which on such a cold day was very much appreciated by all, not least the marshals. The usual spread of cakes as well as hot drinks were also provided. Many runners from other clubs thanked the organisers for all their work.

Despite the bad weather almost 400 runners arrived in the Bourne for the 5 mile challenging run. After overnight rain even the sandy soil could not drain fast enough and parts of the course had mud and puddles aplenty. After the wide start, soon the hills began before a flatter section led on to steep ascents and descents once more.

Despite the welcoming nature of this league there is always strong competition at the front. Chris Peck from Waverley Harriers was the first man home and Alexa King from Hart Road Runners the first lady.

Eloise Stradling strode out strongly for an excellent 11th tag, with Emma Pearson in 16th and Kayleigh Copeland 21st not far behind. This ladies team came 5th. A strong back-up was given by Emma Russ 32nd, Linda Tyler 41st and Lindsay Bamford 43rd with Tara Hunt 51st, Sue Taylor 54th and Jane Georghiou 55th a bit further back out of the 151 ladies. 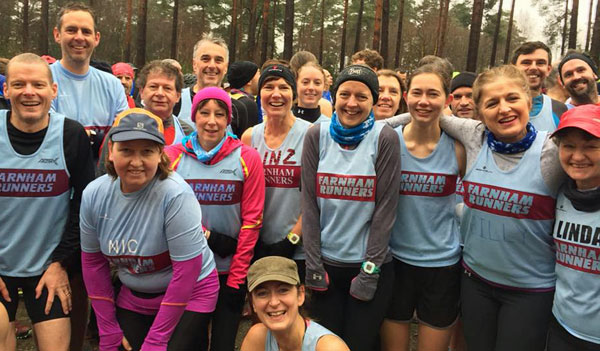