Very warm conditions didn’t deter fifty six Farnham Runners from competing in the 10km Club Championship for twelve age group trophies as well as awards for the overall winners. Unchanged since the inaugural race in 1991, the course is a challenging mix of road and trail with an ascent in the first kilometre, a steep hill in the woods and a long gradual rise near the finish. Then it’s a sprint across the Bourne Green to the sound of cheering supporters.

Among the runners this year was the first treasurer of the club in 1985, John de Moraes while another founder member, Allan Bird, the first “Routemaster”, had volunteered to marshal.

“We are very grateful to the many members who gave up their time to help. The race could not go ahead without them, including Linda Tyler and Kathy Brown who recorded the times” .

The first four were very close most of the way and all were first in their categories. 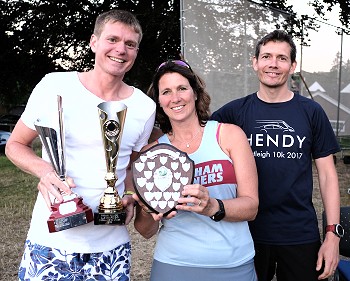 Keen supporters of the club in league races, James Clarke (see photo) was first back in an excellent 37 minutes 38 seconds, first in the senior male category, while not far behind him came Andrew Ellison in 37:51.

Andrew Ellison explains how exciting a race it was at the front:

“Right from the start, James Clarke went ahead and a following group of myself, Sarah Hill, Rob Gilchrist and James Warren followed, letting James go but never out of sight. After a mile, James and I let Sarah and Rob go ahead a bit and twice we saw them walking uphill but this was just ‘ultra-distance’ tactics, allowing them to save energy and catch up and overtake again. The second time, I overtook them and as I turned the last corner towards The Green, I saw Sarah just behind me and had to run out of my skin to avoid being caught in a sprint. It was the hardest I had ever run a race in my life and certainly the closest Club Championship in my memory. Fantastic!”

Stephen Elliott-Nichols in 40:47 won a battle with newcomer David Roy in 40:57 for 2nd place in the senior male category. 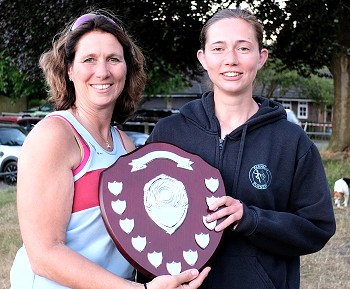 The only under 23 competitors were Toby Loomis in a very respectable 41:34, while Eloise Stradling (see photo) took the ladies U23 shield for the sixth time in 47:41. First M60 Keith Marshall recorded 45:24.

The evening concluded with a Hog roast and presentation of the Awards by club chairman Jacquie Browne. The club’s Smiley Award went to Colin Addison for his cheerful willingness to help out on many occasions.