Farnham Runners welcomed the glorious weather for the 25th staging of their Alice Holt Forest Races. With races for 5 year olds upwards, it was an enjoyable family day out with large numbers of supporters turning out to spur on the runners.

Over 30 volunteers gave up their time to put on this event, mostly Farnham Runners members but also their friends and relatives. Race director, Craig Tate-Grimes had worked tirelessly over many months to organise the event for the sixth time. Their hard work paid off as the day went according to plan and there were many positive comments on the Alice Holt races social media page congratulating the club for the excellent organisation and friendly, smiling marshals.

For the first time there was a dedicated website www.aliceholtraces.org, set up by men’s captain, John Phillips.

The forest-themed medals were a bespoke design for the 25th Anniversary, from an outline produced by Farnham Runners social secretary, Clair Bailey, and a fitting reward for completing the challenging undulating forest track course.

Organisers tried to reduce the environmental impact of the race by using only paper cups at water stations, not having “Goody bags” at the end but giving out bananas and flapjacks instead and recycling as much of the waste as possible. Club secretary, Linda Tyler had volunteered to make hundreds of flapjacks that were very much appreciated.

The course had been set out the previous day by Craig Tate-Grimes, Ali Hardaway, Linda Tyler, Mike Dunkley, Geoff Brown and Stephen Tarrant. Previous race director Charles Ashby cycled round to check the course early on Saturday and Colin Addison took on the vital role of lead cyclist while Emma Dawson, Mark Maxwell and Kathy Brown acted as tail runners.

Geoff Brown was perfect for the role of MC, working hard throughout the day, encouraging finishers across the line and later announcing the prize-winners. Sponsor Stephen Tarrant from Winkworth was on hand to present the 5km and 10km prizes with Jacquie Browne Farnham Runners Chairman.

The race could not go ahead without the support of sponsors. This year the main sponsor was Winkworth Estate Agents, whose director, Stephen Tarrant, is a Farnham Runners member who often runs in Alice Holt Forest. Keen to encourage fitness and wellbeing within the organisation, he was pleased that a team from Winkworth took part in the events, even wearing their own specially designed Alice Holt Races T-shirts.

Local firm, Pure Trees, which takes on any aspect of tree care was also a much needed sponsor for the first time this year. Director Ben Clutterbuck was delighted to sponsor such a fitting event for the company.

Carpark donations of £272 were collected for Oakleaf, the local metal health charity.

The runners were mostly locally based, many from local running clubs, though a few came from further afield. One, Stephan Peters from Fleet, ran carrying a 30 pound pack, as training for a 30 mile run (the 30/30) on Exmoor in October where he will be raising money for the First Light Trust to help Veterans.

There were some stunning performances across the races. The children aged 9-12 for 3km and 5-8 for 1km posted some cracking times, the 3k winner finishing in just over 12 mins and some of the 1k runners in just under or just over 5 mins despite the hilly courses and warm conditions.

Third last year, Christopher Izzard, running for Aldershot, Farnham and District A.C. was delighted to deduct 20 seconds from his previous time to win by over two minutes. First lady, Emily Trumplemann won by over 5 minutes and placed seventh overall. 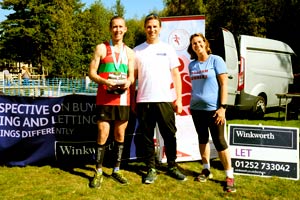 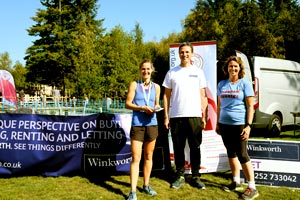 Full results can be found at racetimingsolutions.racetecresults.com