The annual Farnham Runners Awards Dinner, which took place at the Hog’s Back hotel, Seale and was attended by around 70 members and partners, was voted by many to be the best they had ever attended.

Chairman Jacquie Browne had prepared a comprehensive and entertaining slide show of the club, its members and activities throughout 2019. Former chairman Richard Sheppard excelled as MC, with Jacquie Browne awarding the many trophies and prizes. Carolyn Wickham and Linda Tyler had helped to organise the evening.

A silent auction and raffle raised £532 for the Dystonia Society, the only national charity providing support for anyone affected by the neurological movement condition known as dystonia

The prestigious Steve Parker Award for the person who has done most for the club during 2019 went to Clair Bailey for all her hard work and dedication to the club and its members by organising and maintaining a very active and diverse social calendar. These have included regular monthly suppers, a Halloween run, a Hash run, Sunday social runs, a BBQ, as well as the club’s traditional “mince pie run”. Jacquie Browne added:

“Clair has organised the raffle and the Charity Auction tonight and the club is extremely lucky to have someone which so much drive and enthusiasm in this role.”

“The person I would like to give the Chairman’s Award to is Linda Tyler in recognition of her massive running achievements to date, competing at both a national and local level, recently representing Wales and often placed first in her age category in local races. She has represented Farnham Runners in team relays such as South Downs Marathon Relay, Hart 4 and Endure 24. She is one of the club coaches and one of the main leaders for the “Get Me Started” course as well as now being one of the lead members organising the Alice Holt parkrun and supports other local groups with regular coaching.”

The unique “Smiley Award” went to a most deserving Shirley Perrett for her inspirational positive attitude.

Sarah Hill won the Ladies’ Marathon Trophy for the ninth consecutive time for her 2:52:19 in the York marathon, a new personal best for her and a new ladies club record. Her time gave her third place in her age category UK table for 2019.

Stephen Elliott-Nicholls took the men’s Paul Charlton Memorial Trophy for his personal best of 2:54:14 in Seville

David Boakes Wilkinson won The Herbie Memorial Trophy for the second time, for an improvement of 1 minute 8 seconds in the Alice Holt 10km between 2018 and 2019, while Vicky Goodluck, took the equivalent female award, the Prince Trophy after making a huge improvement of 3 minutes 51 seconds.

More trophies were presented to members who achieved the most personal bests in Hampshire Road League races. They were:

Jacquie Browne concluded by thanking all the committee for their amazing support and Abbey Tate-Grimes for her photography on the night.

After the presentations dancing to a local DJ was much enjoyed. 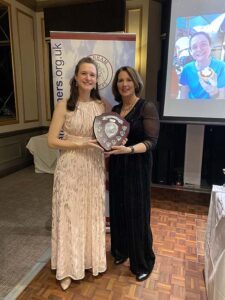 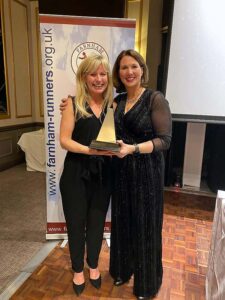 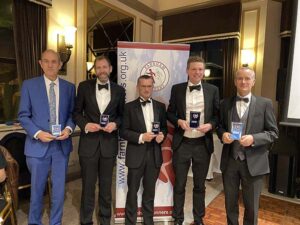 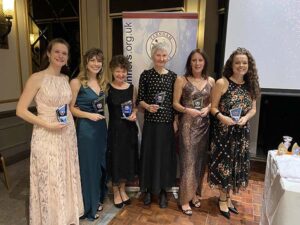 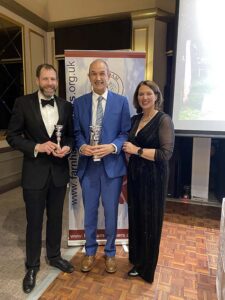 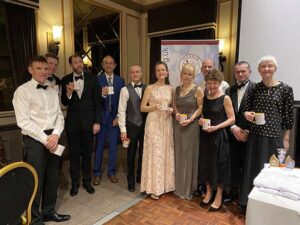