The wonderful thing about joining a running club is that there is always someone doing something madder than you. Running 50km in one go is a perfectly normal thing to do, in fact there will no doubt be people waiting in the wings to suggest an even longer/hillier/more challenging event.

Sometime in December my Farnham Runners running buddy, Marisa, and her partner Andy suggested we sign up for the Chiltern Ridge Ultra. Based on the fact that we couldn’t actually do anything else and were heading fairly swiftly towards another lock down, I thought it might be good to have something to work towards. To be honest, I thought there was a chance it would be cancelled – I was convinced that half-way through the training we’d be told it was all off. So I signed up on the basis that it probably wouldn’t happen anyway! 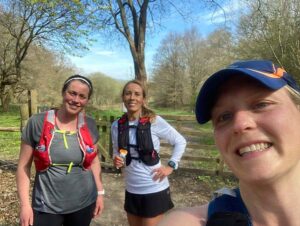 I have done one Ultra before, quite a while ago, and I did all the long runs on my own. What a difference it makes having someone with me to chat away the hours. My two excellent friends, Marisa and Nicola, shared the long runs with me. We were only allowed to run in pairs then, so I’d plan my routes to start with one of them and then do the second half with the other. Marisa got injured about half-way through the training so couldn’t do the whole thing but kept me company in this way during the long weekend runs.

I’ve suffered from good old runner’s knee before and I was quite worried about that happening again. To ensure it didn’t, I was quite religious about stretching and doing yoga. Careful stretching after every run, warming up before and yoga 3 or 4 times a week seemed to do the job.

Before I knew it, it was March and Andy and I were heading out on our longest training run. 42kms along the North Downs way. It is a beautiful route! Marisa and James (another Farnham Runner) met us half-way and ran the rest of the way with us. Other than being exhausted I felt quite good. What is amazing is how a 21km run becomes an ‘easy’ recovery run. Ridiculous! We tapered sensibly and I did even more yoga and stretching for good measure. 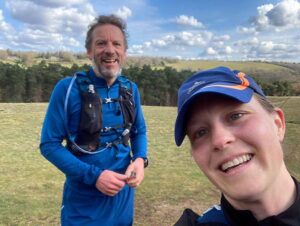 The 8th of May arrived, Covid-restrictions had relaxed and the run was very much on. Typically, the weather was horrible. We hadn’t had a rainy run at all throughout training. Not a single rainy or unpleasant run, not even snow messed up our plans. So it seemed a bit unfair that we were greeted with horizontal rain at the start. Nevertheless we set off – it was a rolling start so we could start at any time between 8am and 9am. We opted for closer to 9am in the hopes that the weather improved which it did a little.

The first checkpoint was 11kms in and we felt quite fresh. Unfortunately, Andy’s knee started playing up not long after and I went on ahead. He kept going for a bit but stopped and turned back, something that is so hard to do but certainly the right decision. There’s no point injuring yourself so badly that you can’t run for the next year. 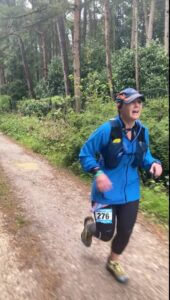 This section was out and back along the actual ‘Ridge’ and I found it the hardest part of the course. For one, I was completely alone – there was not a single person in sight for miles and miles and the weather made it seem quite desolate and lonely. I also realised too late that I probably hadn’t taken in enough fuel to begin with so when I got back to the checkpoint at 26kms I inhaled a banana, (there’s no other way to describe how quickly I ate it!) electrolytes and a gel which made me feel better almost immediately. What also helped was that I’d seemed to catch up with some people who had started a bit earlier, so I wasn’t on my own which made me feel less mad!

Checkpoint 3 was at 42kms and I quite enjoyed that third stretch, the Chilterns really are very pretty. Hilly, but pretty. I have some great colleagues who I run with too and had given them my race number to follow during the day. Every time I got to a checkpoint I got messages of support from them which was really uplifting! I was feeling surprisingly ok and felt like I was running at quite a quick pace – I really wasn’t, it was a plod at best! But I was running and the last few miles ticked away. Cruelly, about 100m before the end there is one last style to climb over and then I was finished. 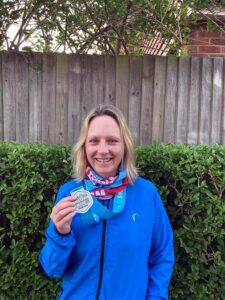 I had been running for 6 hours 24 minutes and came 22nd of 39 ladies who finished. 50kms is a long way, but it is amazing what our bodies can do. I knew I had done the work in training so it was really a matter of telling the voices in my head to shush when I felt quite low about 23kms in.

The race was well organised by Runaway Racing and I would definitely recommend it as one to do. I also managed to raise a decent amount of money for a wonderful charity in my home town in Bloemfontein, South Africa called Lebone Village. The donations I’d received certainly kept me going too.

My dad has been part of a running club for as long as I can remember. His love for running has worked its way down to my brother and me. I am so grateful to have grown up watching his dedication whilst training for the Two Oceans Ultra marathon in Cape Town (which he did 11 times) and the quiet support my mother offered by cooking copious amounts of pasta! Join a running club, Farnham Runners are a wonderfully friendly bunch of people of all ages and abilities. Join a running club, you will make life-long friends and do things you never thought you’d be able to do.