Home » All press releases » Learning from the master of technique

Learning from the master of technique 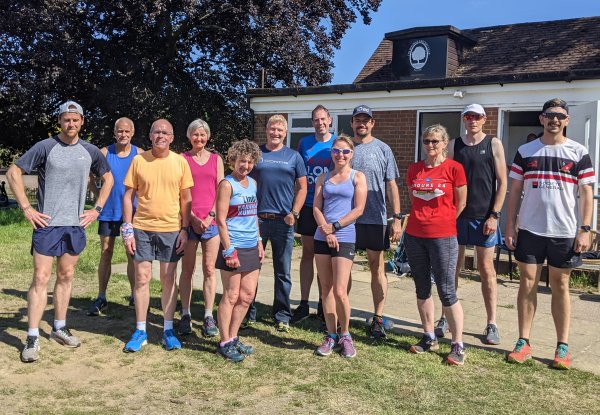 Recently, twelve Farnham Runners were given the opportunity to work with running technique coach and movement guru, Shane Benzie at a coaching and movement workshop organised by men’s club captain, Ali Hardaway and held at the clubhouse and on the Bourne Green.

Author of the best-selling, “The Lost Art of Running”, Shane has travelled the world to work with, live with and study a wide range of athletes and indigenous people in different – sometime extreme – environments.

He has worked with some of the world’s greatest athletes, including Eliud Kipchoge, Wilson Kipsang, Tom Evans, Tom Daly and the GB diving team and the Team GB 24 hour running squad.

As one of the club’s coaches, I was invited to take part in the workshop, not only to improve my running technique, but to pass on what I learned to the members who attend my weekly training sessions. The group was comprised of runners of different ages, standards and aspirations, but we all benefitted from the wealth of Shane’s experience, and without exception, by the end of the afternoon, we had all improved our running form.

Once the introductions had been done, we were outside for a quick warm up, then asked to run one after the other in a line so that Shane could record us on video. Back inside, we were able to watch ourselves run in slow motion and analyse our running style.

Shane taught us how to incorporate natural movement techniques into our running; how to improve our form by holding our heads up, keeping our fascia system fully stretched and generating free elastic energy; we learned how to strike our feet correctly, how to improve our stride length and achieve the ideal cadence; how to hold and move our arms correctly. The workshop was a combination of advice from Shane, running outside to put what we had learned into practice then back to the clubhouse for more scrutiny and discussion.

Shane emphasized the importance of understanding how it looks and feels to move our body correctly to achieve an efficient running style. We learned how to run with better form and move more efficiently with less effort, understanding how the body’s fascial system works.

“That was absolutely fabulous. Those photos show me running without being hunched for the first time in 20 years”.

“Even better than I’d hoped”.

“It was really interesting with lots of amazing advice“.

Just some of the comments made by the runners at the end of a fascinating afternoon during which we all noticed big improvements in our running.

Everything Shane said to us made a lot of sense and he has helped to show us how to make running easier and more enjoyable. By the end of the session, we all felt that we were more efficient runners. The hard work now begins as we need to remember what we have learned and put it into practice whenever we run.

Shane will be returning to the club next month to run a second training camp for another 12 Farnham Runners, but it doesn’t end there as we are looking forward to welcoming Shane back for his intermediate training sessions in the near future.