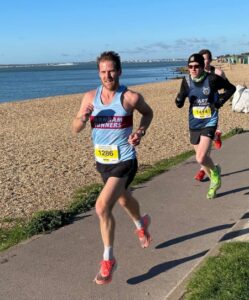 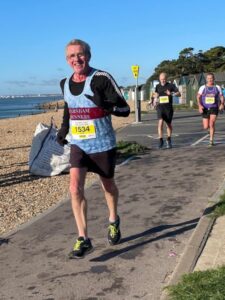 Seventeen Farnham Runners made the journey to Gosport for the very popular half marathon, organised by Gosport Road Runners. The flat two lap course took runners West against a strong breeze before returning beside the coast in glorious sunshine. The fast course helped many to gain personal best times, helped by them continuing to train regularly, either alone or with others, throughout the pandemic.

Sue Taylor was delighted to be first Farnham Runners lady home in 1:43:42, taking a huge 14 minute chunk off her PB. Next Linda Tyler, who was first F60 in both the Swansea Trail and Marlowe half marathons recently, had to settle for 4th F60 in Gosport in 1:47:59. Running her first Hampshire League race, newcomer Bridget Naylor placed 10th F55 in 1:50:34. After a summer of training with Farnham Runners, Bella Weetch took a massive 18minutes from her PB in 1:51:09. This A team came 9th in the top flight. 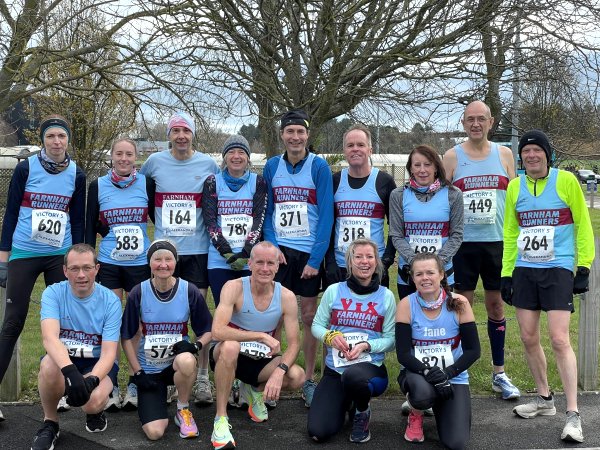 Two weeks later, on a bitterly cold morning, 24 Farnham Runners made their way to Lakeside North Harbour in Portsmouth for the Victory 5. It was the 75th anniversary of this prestigious 5 Mile Road Race, run over a flat and virtually traffic free two lap course, though restrictions meant that the course couldn’t avoid some tight turns. Begun in 1946 the race used to attract runners from all over the country, as a very rare 5 mile event at the time with a fast flat route. It retains a very high standard of competitor in all age groups.

Despite the strong wind, eleven of the Farnham contingent gained personal best times. Nik Darlington in 28minutes 30 secs was 38th of the almost 700 finishers. Matt Saker was an excellent 4th in the strong M50 category. Justin Clarke in a personal best 33:22 was 6th M60 and Damian Probett, returning to fitness after injury, in 34:39 completed the A team.

This team came 9th in Division One on the day but lie 6th in the table after four of ten events. 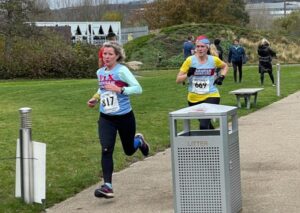 Leading the B team was 5th F65 Jane Georghiou in 40:50, followed by Vicky Goodluck in 42:33 and Kay Copeland (6th F60) and Clair Bailey in 42:34. Both Vicky and Clair achieved PBs by a second or two. This close–packed team placed 8th at Portsmouth and are 4th on aggregate.

Jane Probett raced to 48:58, while Alison Mungall took a huge 10 minute chunk off her PB in 56:14. Sadly there weren’t enough ladies to count for a C team but, as few other clubs had full C teams, Farnham Runners’ Cs are still 7th of 15.