Home » All press releases » That was tough – let’s do it all again!

That was tough – let’s do it all again! 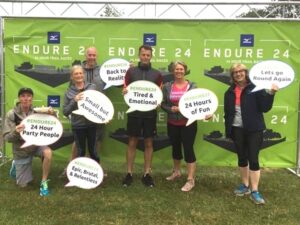 Deferred twice from its original date in 2020, and moved from Wasing Park near Reading, to the Temple Mead Meadows in Henley- on- Thames, this year’s event took place from the 23rd to the 25th July.

Such is the popularity of the event, there were:

Farnham Runners was represented by five teams and a small group set off from the club on Friday morning to secure a place in the queue to obtain a prime camping location as soon as the gates opened at 10am. This achieved, they very kindly erected all the tents for the teams, before soaking up the Endure atmosphere in preparation for the race ahead the following day.

With most of the runners assembled by Saturday morning, registration completed and pre-race preparations complete, it was time for the first runners to line up for the 12 o’clock start. This was probably the first mass start race for most of the 500 runners gathered together since the beginning of lockdown and the atmosphere was electric.

The multi terrain, uneven 5-mile course followed the River Thames, past Temple Island and the Hambledon Lock before the ascent at 2.4 miles taking the runners through the beautiful Berkshire countryside and a welcome aid station at the top. The descent offered stunning views across to the Endure site and the finish back at the race village.

Throughout the day and night, runners took it in turns to complete a lap, leaving their team mates to replenish energy levels, relax and, if possible, sleep, taking advantage of the excellent facilities provided by the Endure team; from toilets and showers, sports massage and shopping opportunities to an array of eateries to satisfy all food tastes.

Sunny intervals and showers would probably be the best description of the weather throughout the challenge; when the sun shone, it was very hot and so the rain and nightfall were a welcome relief.

Farnham Runners were absolutely delighted with their results. With the support and encouragement of their teams they exceeded expectations, coming home with an array of medals and trophies. 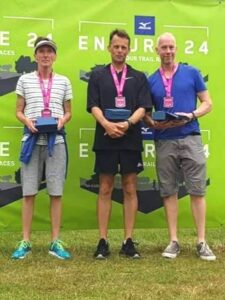 Joy of Five – Mark Maxwell, Keith Marshall, Rob Gilchrist and guests Neil Rushton and Paul Benson came 3rd out of 16 teams in the Male Small Team category with a total of 37 laps.

The Farnham 6 – Helen Farrell, Paul Mackie, Craig Tate-Grimes, Sue Taylor and Harvey Wickham were 11th out of 105 teams in the Mixed Small Team category with a total of 30 laps. 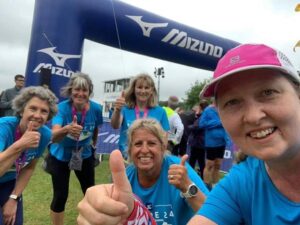 Return of the Hobbits – Carolyn Wickham, Nicola O’Connor, Penny Schnabel, Julia Tagg and Jackie Wilkinson were 11th out of 24 teams in the Female Small Team category with a total of 23 laps.

This is what some of our runners had to say about the weekend:

“Tough but great team atmosphere great catching up with friends.”

Carolyn Wickham described it as a:

“Fabulous weekend of running and giggling on very little sleep…I couldn’t have done this without my team mates.”

“Truly epic running and the spirit of support, resilience and good humour was in abundance as ever.”

At least one team has already signed up for next year…..!

More photos are included in our “Races during Covid” gallery