Home » All press releases » A ticket to Ryde and other races

A ticket to Ryde and other races

It was touch and go whether the whole Farnham Runners team would make it to the Isle of Wight for the Ryde 10 miler, the sixth event in the Hampshire Road Race League calendar for the season. Gusts of 48 mph were predicted for the time of the crossing to Ryde. The hovercraft was cancelled the night before but some made it across the water on the car ferry instead, so all thirteen managed to get to the start line in time. Only a few managed to get the Farnham Runners traditional photo of the group in bitter conditions in front of some tropical palm trees.

Conditions weren’t in fact too bad for the run, much warmer than it has often been in the past, though it was windy. Six of the thirteen managed to get personal best times despite the hills.

Heading the B team was Kate Townsend in 1:36:35. Next came double Paralympic gold medallist in two different sports, Rachel Morris, now a member of Farnham Runners as a wheelchair athlete. This was her first experience of a Hampshire Road League race and she crossed the line in 1:44:36 to take second place for the B team. Alison Yearsley clocked 1:50:45, followed by Nicola O’Connor in 1:57:43. This B team came 11th of 16 in the B division.

In a very different event, three Farnham Runners took part in the Brutal 5km, a race that certainly lives up to its name. Held on a tough route at Chawton, GB Paralympian Rachel Morris, Kate Townsend and Nicola O’Connor, toiled round a hugely challenging course through mud, water and up some steep hills.

The first wheelchair runner to complete a Brutal, Rachel and the team were buzzing at the finish:

“That was better than winning a gold medal at the Olympics”.

Lee Ludlow was also in support, providing some serious pushing power through the mud. The photos say it all! An amazing team effort.

Renowned for its mud, recent rain had ensured there was plenty most of the way round the 8km course, though a swampy section of previous years appeared to have been drained. 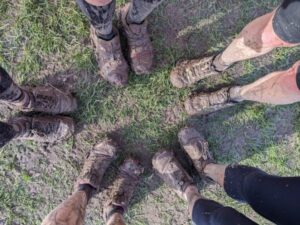 Kayleigh, who took a chunk of over 3 minutes from her previous best half marathon time at the Surrey Half Marathon the following weekend, recording an excellent 1:29:59, wrote:

“Parliament Hill is the “home” of English Cross country and this year it certainly didn’t disappoint! Over 1000 women charged up the first hill and endured 5 miles of sloppy mud and gruesome hills. The iconic views of London softened the blow. The atmosphere was incredible and competing in the same race as Olympian Georgia Taylor-Brown is something I’ll remember for a long time!”

(Georgia won a silver medal in the Triathlon at the Tokyo Olympics, before going on to be part of the silver medal winning team in the mixed relay triathlon.)

The next day there was success for Farnham Runners at the Wokingham Half marathon, a flat course on rural roads. Three of the four gained new Personal best times. Nik Darlington, back in 1:15:15, reported

“A PB by well over a minute, and more than 13 minutes quicker than the same race 2 years ago. A headwind on the way back might have cost a sub-75 but I’m over the moon. Thanks for the Farnham Runners’ support along the way! And my amazing support crew.”

Though not a PB, Sarah Hill clocked an excellent 1:27:55, while Emma Pearson was delighted to deduct over a minute from her previous best for 1:33:06 and Stephen Tarrant recorded a PB of 1:38:42.