Runners produce best efforts in challenges across the south

A huge turn-out of thirty-nine Farnham Runners travelled to the coast to take part in the fifth Hampshire Road Race League event of the season, the Stubbington Green 10km. For the first time, apart from for the London marathon, the Farnham Runners committee provided a coach in order to reduce the club’s carbon footprint for travel to races and to be a more sociable way to travel, though masks had to be worn because of Covid-19. Instead of a fare, donations were taken and the £115 collected will go to the local Phyllis Tuckwell Hospice.

The Stubbington 10km, with its few inclines, is renowned as a personal best setting course, so it draws a high standard of athlete from Hampshire and adjacent counties. Starting in Stubbington village it wound along country lanes before a glorious stretch along the road close to the sea in the final kilometres. Conditions on the day were ideal. The sun shone, the temperature was just right for running and there was no wind.

Almost half (17) of the Farnham Runners gained personal best times, some by as much as 3 minutes. For some it was their first 10km road race and all took full advantage of the favourable conditions and route. Three were prize-winners in the top three and ten were in the top ten of their age categories.

Three teams of four, A B and Cs count for the club’s placings in the Hampshire Road Race League.

Chris Raby, who has made a great improvement in his pace since joining the club last summer, headed the B team in 42:09, a whopping PB by 3 minutes for seventh place in the M60 category. Terry Copeland was 9th M60 in 42:48, while Andrew Brown in 43:07 and Richard Denby, with another PB of 3 minutes in 43:12 completed the B team score to rank sixth in the top B division.

Newcomers Rebecca Lloyd and Bridget Naylor, in their first 10km road race, paced very well to overtake in the last few km to record 49:22 and 49:37 respectively. Jane Georghiou clocked 50:47 to take the top F65 spot, while Kay Copeland was sixth F60 in 52:22. This team was 12th in the top B division. 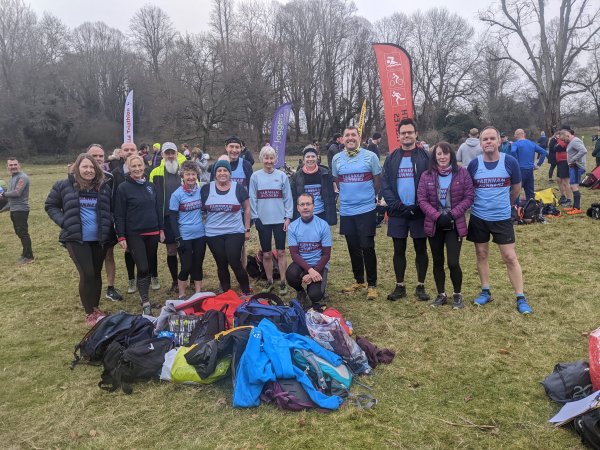 The next Sunday was the fourth Southern Cross-Country League race, organised by Alton Runners in the grounds of Chawton House. Thirty-six Farnham Runners were there to support their team.

Clive Frostick gave his thoughts on the race:

“It was a pleasure to return to Chawton House, to see some old friends and to meet some new ones, as we have gradually returned to running together in large groups. The weather was perfect, slightly warmer than the previous days but still cool enough for running comfortably, and crucially it had been dry for the previous week so that the course was, whisper it quietly, not too muddy.

The five mile course was a very pleasant tour of fields, woodland and some of the 275 acres of grounds around Chawton House. The house was once owned by Jane Austen’s brother, and Jane lived in a cottage in the village, so that we must have run along part of the route she would have used to walk to visit her brother. Or maybe she ran too?

At the start we wondered what Sense we had in getting up early on a Sunday morning for a muddy run, but by midway our Sensibility was stimulated with beautiful views and keen competition, and at the end we needed all the Persuasion the keen crowd were providing to encourage us to sprint for the line

Two years ago this was the scene of my first cross country race since school, some 45 years ago! On that occasion I found the hills and the mud made it tough going after the relative comfort of tarmac on roads and pavements and even parkruns. The final indignity was being chased by sheep just before the final stretch, but this year the sheep kept away, or they had been well marshalled by our wonderful hosts, Alton Runners”

Showing them all how to do it and repeating his success in the recent Lord Wandsworth cross-country was Hamish Maclean who won the race, a huge boost to the team result.

Charlie Hill-Venning put in a very strong performance as 50th finisher, followed by Colin Addison who came 63rd after flying in a parkrun for a new age group best percentage the day before. Neil Ambrose took 64th, while Bob Brimicombe took the final team place in 79th.

Back with Farnham Runners after a break was Mike Smith in 83rd, who along with John Hill-Venning 87th and Ian Marshall 99th gave strong back-up to the team.

Leading in the Farnham ladies was Louise Granell in a fine 9th. Linda Tyler was second back in 54th with Lindsay Bamford on her heels in 55th. Sue Taylor in 68th, Jane Georghiou in 71st, Bridget Naylor in 73rd, Rebecca Lloyd in 82nd and Kay Copeland in 88th were all in the top 100 ladies.

The men’s team came seventh and the ladies’ ninth. Overall this gave them a creditable eighth place of the 24 clubs in the league. 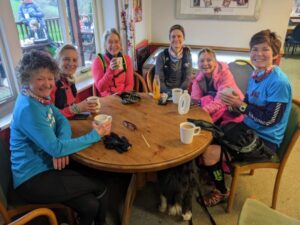 It wasn’t yet over for eight intrepid runners.

In training for the challenging 20 mile “Grizzly” multi-terrain across the hilly Devon coast in March they opted to run back to Farnham along the St Swithun’s Way path, thirteen miles and very muddy at this time of year. Back to Farnham Park, six of them, all smiles, celebrated with a very well deserved hot drink. 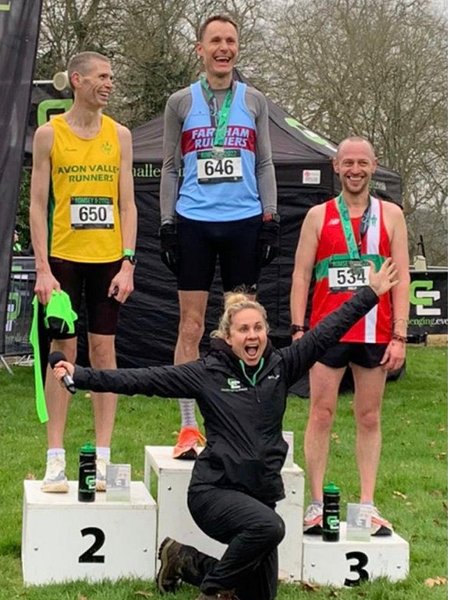 On the same day new member Gary Armstrong, unable to take part in the cross country league as the very fastest runners are excluded, travelled to Romsey for a five mile race- and won!

“It was a really well put together race in the lovely surroundings of the Broadlands Estate. It was cold but the lack of wind made it perfect conditions for running and the course is almost perfectly flat. To make up the 5 miles it was two short loops, a long out and back and then a final short loop. I went out with a lead group of around 6 runners but quickly that was a group of 3. I took the lead about two miles in and kept pushing for home. The lapped course meant there was a lot of passing other runners but having a bike lead out announcing my arrival was great fun! I came home in 26:30 which is a 5 mile PB.”

The race had 680 finishers and Gary was a minute head of his nearest rival. His time is a new Farnham Runners club record.

“The club currently has a record number of members for the time of year, a total of 217, without counting the honorary members. We are still welcoming new members, see the membership information page for details.”