Two trips to the South Downs in two days banished any winter blues from the minds of Farnham Runners. Glorious Goodwood was the first venue for the 2nd round of the Hampshire League cross-country, followed by a Today’s Runner Winter League race at Queen Elizabeth Country Park the next morning. Some members’ enthusiasm saw them racing both days. 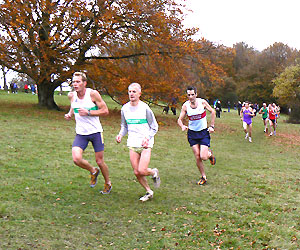 At Goodwood the men’s team came 7th in Division Two, which pulls them up to 6th after two of the five races in the series. Their veterans were 5th on the day but stay 6th on aggregate. The men’s course was a tough 9km with two steep ascents and three circuits of an undulating top field.

Captain Dan Smith led in his team, 86th of 234 to cross the line, with Charles Ashby taking 35 places from his October result (105th). Bob Brimicombe showed the value of his secret training (127th) followed by Colin Addison who has overcome injury to place 162nd. Terry Steadman, strong as ever, took 166th tag and was 16th M50. Andy Tweed completed the veteran’s team (190th) with Don Melvin 216th.

The ladies’ course was 6km with only two ascents but still three circuits of the top section. Again the team was led in by the captain, Jane Georghiou who placed 39th of the 109 finishers. Clair Windiate paced herself well and made an excellent debut in this competitive league for 58th. Jo Edson started very strongly and completed the main team result (61st), while Ange Epps (65th) was not far behind and made up the veterans score. Lindsay Bamford provided valuable back-up (75th).

The team finished 11th and move up to 11th on aggregate with their veterans a very good 4th considering the standard of the league.

The Farnham Runners men fielded an unbeatable team in the Sunday race, with 4 of the five scoring team in the top ten finishers. Conditions were challenging with hills and enough recent rain to render the chalky sections slippery.

Stuart Morgan was neck and neck with Michael Rix most of the way but strode out to finish an excellent 4th, while Dan Smith overtook in the last 100 metres to snatch 7th, with Rix finishing 8th. Charles Ashby was close to Mark Taylor but Taylor pulled away at the end to take 10th with Ashby finishing in spectacular style with an unintentional cartwheel in 14th. This team took first and with the ladies in fourth resulted in an overall placing of second for the Farnham club.

For the ladies Jane Georghiou battled for 3rd slot but had to settle for 4th in the last 200 metres while Clair Windiate, in her second race in two days, ran strongly to pick up tag 14. Anna Reay who ran a superb debut marathon in Amsterdam in a time of 3.35.26 (a Farnham Runners debut record) made a very positive contribution to the team (26th).