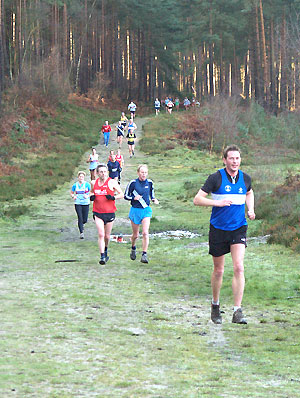 A wonderful crisp sunny morning added to the enjoyment of the 250 runners who assembled for the start of the Today’s Runner Winter League cross-country staged by Farnham Runners on Sunday. Race director Charles Ashby warned of potential hazards including sections of mud and sand but he and others had spent a great deal of time marking out the course so no-one could get lost over the hilly 4.8 mile course.

Farnham Runners were delighted to claim the top place overall on the day, their men’s team coming first by a huge margin of 80 points over second placed Portsmouth Joggers, who entered a record 23 male runners. Farnham ladies entered the largest team of 21 and finished only one point adrift of the leaders Liss Runners.

First to trouble the timekeepers was Tony Allen of Stubbington Green Runners in 27.32, followed by Andy Lovell (Portsmouth Tri) in 28.04 and Craig Berryman (Havant AC) in 28.21.

The Farnham Runners men were unbeatable, with four slots in the first eleven and a team of 20, showing strength in depth as well as quality.

Graham Russ competed for the first time in this league and showed his potential with an excellent 5th place and time of 28.59 over the challenging course. In top form Dan Smith romped home to claim 6th (29.11) with Mark Taylor in his wake (9th). Michael Rix turned out to support the club despite feeling unwell for a very useful 11th, with Charles Ashby, even after his efforts to organise the race, making the scoring team of 5 (21st). Ollie Anderson, in Farnham colours for the first time, impressed clocking 31st, while Steve Kitney complemented his recent road race successes in 34th.

For the ladies, after Jane Georghiou, Samantha Pelham and Angela Epps both put in superb effort for the team to take 11th and 12th slots. Jo Edson (15th), Gabi Hitchcock (16th), Gemma Mitchell (23rd) and Lindsay Bamford (26th) provided tremendous support and helped the team result by excluding other clubs from high positions.

Chairman Malcolm Fitzsimmons particularly thanked the race director and the Red Cross as well as all those, including families and friends, who had helped in any way to make the day so successful- not only the marshals but also those who helped to prepare the feast of sandwiches and cakes for the hungry runners after the race.