SXCL Folly Farm and the Bournemouth Half Marathon and Supersonic 5k 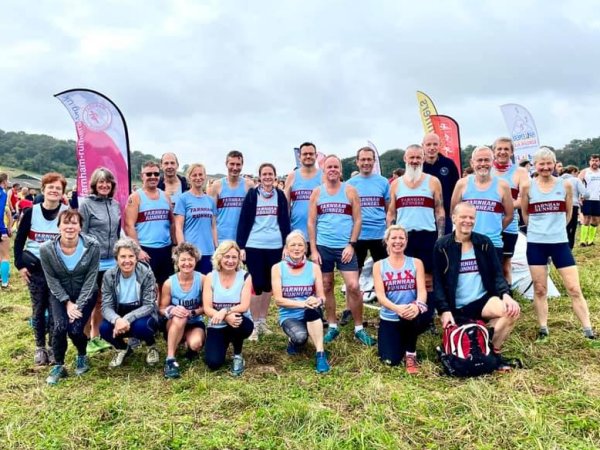 Farnham Runners were delighted to return to cross-country racing at Folly Farm near Basingstoke in an event organised by Basingstoke and Mid Hants AC. This was the first in the 2021-22 season of the Southern Cross-Country League and Farnham Runners were one of the 24 clubs taking part, from all over Hampshire and other adjacent counties. The last such event was at the beginning of March 2020, just before the first lockdown due to Covid-19.

Weather conditions were dry and favourable, with hazy sunshine giving way to stronger sun before most had finished. The route of just under 5 miles took runners along compacted farm tracks around fields, some with ruts that could make overtaking tricky. Many runners were beginning to wonder where they would start to go downhill after a gradual incline of almost 3 miles. Then the course levelled off before a steeper downhill, a short ascent and then a quick descent to the finish.

Utra-runner David Roy skipped round for a very useful 29th place. Colin Addison and Bob Brimicombe both ran strongly for 48th and 64th places respectively. Tim Farrant in 83rd and Ivan Chunnett in 92nd completed the team scoring. This team came 11th of the 24 clubs

Also under the 100 mark were Terry Copeland in 95th and Justin Clarke in 98th.

Louise Granell flew round for an excellent 7th place of 144 ladies to boost the team result. Linda Tyler, 36th, and Sue Taylor, 38th, put in remarkable performances as they had both completed marathons just one week previously. Only three ladies count for the team and this team placed 7th. Next came Kay Copeland, 62nd and Jane Georghiou 66th.

By combining the men’s and ladies’ team placings gave an overall result of 7th place of the 24 clubs, a sound start to the series. 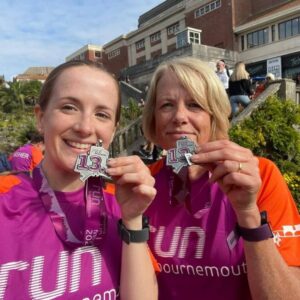 On the same day Nick Hitchcock clocked 1 hour 37 minutes 37 seconds and Sally Kerr 2:28:25 in the Bournemouth Half Marathon. Sally took part in the Farnham Runners “Beginners” course in 2017 and, running with her daughter, she was pleased to complete her first half-marathon. Nick raised a sum £3,288 for Macmillan Cancer Support in memory of his father.

The previous day and just six days after running the London Marathon, Gabriella Hitchcock was third in the Bournemouth Supersonic 5km in 20:15.