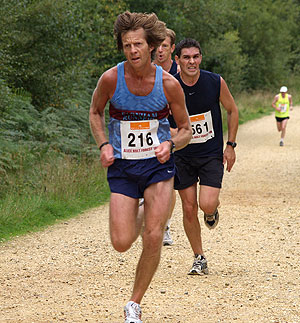 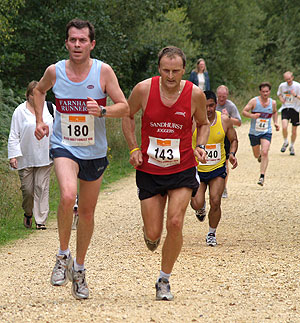 Organised by Farnham Runners, the eleventh Alice Holt Forest 10km attracted a record number of almost 600 entrants with exactly 500 finishing this challenge in the pleasant woodland surroundings. Each year this race attracts a wide variety of standards of runner, with experienced club runners battling it out for the individual and team prizes, while others are happy to complete their first 10 km race.

This year for the first time Bells Potter, solicitors of Farnham was one of the main sponsors with Farnham Sports Centre (Kinetica Health Club) and Farnham Town Council making their usual generous contributions. Without their help the event could not go ahead. Members of the Hedgehogs, a group that raises funds for a range of worthwhile causes in Farnham, helped on the day and proceeds from the race will go to this charity.

Many relatives and friends of Farnham Runners kindly gave up their time to help with the organisation and marshalling on the day and, again, the race could not have gone ahead without their assistance.

Race Director, Charles Ashby started the runners off over the undulating, some would describe as decidedly hilly, course, mainly on well-made tracks through the forest.

A beaming Christopher Thompson of City of Portsmouth AC was the first to appear after only 34 minutes 20 seconds. He was delighted to win his first race and incredibly achieved a personal best 10km time in this tough race. After 5km he started to pull away from the opposition and held on to this lead. “ I couldn’t believe it” he said, “I just came to the race with my father!”

Andrew Bell of Cambridge University, who has raced here twice before, took the second prize and trophy with an excellent time of 34.44 while Joachim Wolf of Belgrave Harriers was only 3 seconds behind (34.47).

For the ladies Jess Draskay-Petersson from the Stragglers club set a new ladies record with a most impressive time of 37.21. She is just back from coming second in the Powerman Duathlon in Switzerland and off to do the Berlin Marathon in two weeks’ time.

Susannah Harrison of Woking AC is a familiar face among the prizewinners and she came in as second lady and first veteran in 42.00. Third lady was Penny Clayton from Exeter in 43.46.

There was an extended list of age category prizes this year:

Although a large number of Farnham Runners were involved in the organisation 35 completed the race and the local club was delighted to claim both ladies’ and men’s first and second team places!

Sarah Edson headed in the ladies with an excellent 44.52, while Charlie Gray achieved a course best by four minutes and a new personal best 10 km time (46.50). Charlotte Self was delighted to complete the first ladies’ team (48.50).

Some spectators may have noticed a runner carrying a 40lb military bergen around the course. This was a local army competitor, Stuart Patterson, who is training for the annual Commando Speed March in Scotland, a re-enactment of the start of Commando Training in World War 2. He finished the race in an amazing 56.41.