Farnham Runners had a successful weekend excursion to Tywyn, Wales in the challenge to beat the famous Talyllyn railway as it makes its way up the valley to Abergynolwyn and back. The 14.7-mile route ascends and descends steep terrain through the valley, partly on a narrow footpath on the side of a hill with little chance of overtaking. 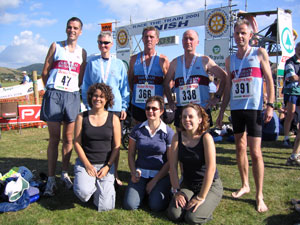 Cheered on by enthusiastic supporters on the train, five from the club finished this route with two opting for the 10km race over similar terrain.

Dan Smith (pictured running above) was successful in beating the train for the third time and sped round in a most impressive time of 1.36.10, which placed him 18th of 678 finishers. Charles Ashby entered the finishing straight just as the train was pulling into the station and crossed the line to cheers all round as he came home just three seconds before the train blew its whistle! His time was 1.47.33.

Terry Steadman set off as he meant to continue, at a cracking pace that he never let up, despite the difficult terrain. He took another 2 minutes form his already excellent personal best (1.51.53). Jane Georghiou had no chance of keeping up with him but finished as 17th lady and set a new W50 record for the course (1.57.35). Malcolm Fitzsimmons was delighted to take 2 minutes from his previous best (2.11.13).

Farnham Runners, friends and family camped at Tywyn for the weekend.