Farnham Runners rounded off the festive season with a fancy dress Club Handicap race of 4.25 miles from the Bourne Green pavilion. The schedules to beat were very tough and based on formulae-adjusted times of each member’s best 10km races during the year.

Julie Russ (pictured centre of photo in red) used her fairy wand to good effect to outrun her anticipated time by almost a minute and win the trophy that will be presented at Farnham Runners’ awards dinner in January. Her nearest rival, Tim Cummins, although daunted by his handicap, came through strongly as runner up. 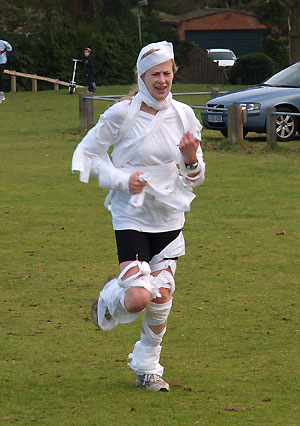 The next six came home within 50 seconds of each other, despite widely differing handicaps and paces. Don Melvin dressed warmly as an American hunter and was a jubilant third finisher. Straight from Hogwarts, wizard Frances Britain cast spells to keep ahead of Lindsay Bamford. Sarah Edson, curiously dressed as a young version of her mother and encouraged by her recent success in the Haslemere Boxing day run, flew round in under 30 minutes to be the fastest lady by almost three minutes. Waiter Robert Bevan ignored any orders along the way to cross the line 4 seconds later.

However, it was Sally Lawrence (pictured) who gave the most remarkable performance. Defying the advice of doctors she rose from her hospital bed, pale and encased in bandages, to race and claim the fancy dress prize.

Stuart Morgan strode round to be the fastest finisher, followed by Charles Ashby, who had travelled especially from Sherwood Forest, and scout Steve Murphy.

Andy Tweed came in ahead of Jo Edson (as an older version of her daughter) and Bernita Mayhead, who dressed for the start of the new term a day early.