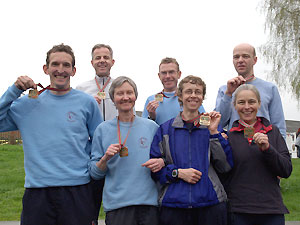 First home Graham Wilton was delighted to shave 23 seconds from his previous best to cross the line in an excellent time of 2.48.58 that placed him 490th of the 33,000 finishers.

Mike Anderson was satisfied with his impressive 3.08.06 in his fourth marathon. Charles Ashby celebrated his recently acquired veteran status with a personal best by three minutes (3.15.25), even though his training was interrupted by a stint in Sri Lanka helping survivors of the tsunami.

With virtually no training Vince Crowley finished his 12th consecutive London Marathon comfortably in 3.29.16. Andy Tweed only just missed his 3.30 target in his second attempt at this distance (3.30.31) while David Lloyd, hampered by recent injury, was close behind (3.31.33).

Nicolette Overy was delighted to deduct 11 minutes form her personal best and be 997th lady home (3.41.46).

Charlotte Self and Warren Butler were both running their second marathons and both gained their sub 4 hours target. Charlotte took 3 minutes from her previous best (3.57.19) while Warren could not have judged the pace better (3.59.57).

Kate Dimmock only just missed her 5 hour target (5.03.41) while Katrina Dunbar and Zoe Ennor went round together and were happy to finish in 5.59.09.

Margot Applebee took a whole hour from her pb (5.25.02), and she was accompanied by husband John who dressed as a banana to raise awareness of the charity Leukaemia Research.

In the Paris Marathon Michael Rix flew round to be the only Farnham Runner for many years to dip under 2.45 for this distance. He took 11 minutes from his previous best last year and crossed the line after only 2 hours 43.06. This will earn him a place on the Championship start with the elite runners in the London marathon next year.

Also representing Farnham in the Paris Marathon was Nathalie Garrison who produced an incredible “negative split” running the second half almost an hour faster than the first. She finished in 4.53.14 in her debut at this distance.

Mark Taylor ran in the recent Boston Marathon and finished in 3.19.24, while Steve Kitney and Nick Hill chose the recent Stratford Marathon for their first attempt at the distance (3.29.53 and 3.35.39 respectively).