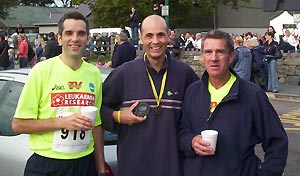 For John Applebee, the lowest moments came on the second day.

Farnham Runners’ affable social secretary was attempting a running treble – three marathons in three days. But towards the 21-mile mark of day two, fatigue and worry started to take their toll.

He already had one marathon in his legs. Number two was not yet finished. And whether the Sunday traffic would allow him to make it to Heathrow in time to fly to marathon number three was still unknown. There was, it would turn out, real cause for concern.

The idea for the attempt had been planted in John’s mind in May, on the Isle of Wight, when he got to talking to some friends on the marathon circuit. Someone mentioned there was a treble at the end of October.

John said to himself.

“Actually, I quite fancy this.”

John, who suffered from leukaemia many years ago, set himself an ambitious goal: to raise more than £5,000 in October alone, through the marathons and a music show, for Leukaemia Research.

He raised money by selling tickets to the show, holding a raffle, and entering the three marathons – the Beachy Head cross-country through the South Downs, the Snowdonia Marathon around Wales’ highest peak, and the Dublin Marathon through the streets of Ireland’s capital city.

The attempt began on Saturday, Oct. 28, in Eastbourne. John, who has twice run the 89-kilometre Comrades Marathon in South Africa, has a strategy for ultra-distance: to alternate walking and jogging right from the start.

John recalled later, though he acknowledged the last six miles had been tough. He’d planned on running the race in six hours; he finished in 6:07. A success.

But still ahead lay the real challenge of the treble – travel. After the race, John and his wife, Margot, hopped in a borrowed people carrier and drove north. Near the junction of the A3 and the M25, he met his two assistants – Dan Smith, Farnham Runners’ 2006 Grand Prix winner, and Terry Steadman, the club’s reigning M50 champion.

Dan’s wife, Sarah, had made a load of pasta, so John and Margot were able to eat while Dan and Terry steered the people carrier toward north Wales.

Snowdonia is a chip-timed race. Organizers do not object if competitors, particularly those trying to complete the treble, start early. So the Farnham trio, John, Dan and Terry, set off about an hour ahead of the scheduled start.

It was a glorious day.

“There were lovely blue skies, not a breath of wind,”

“We were running alongside lakes and they were mirror-smooth.”

At one point, they overtook some Irish runners, one of whom was running his 250th marathon that day. The Farnham group listened to the Irishmen’s stories and the time passed quickly.

The villagers were unaware that runners were allowed to start the race early.

“They thought me, Dan and Terry were leading the Snowdonia Marathon,”

Twenty-one miles in, the runners began a long slow climb. John reached a low ebb. He found it tough even to walk. He looked tired, he sounded tired and, it seemed to Dan, he had lost his normal, cheery edge.

Terry tried to encourage him, to point out that they were ahead of schedule, that everything was going to be fine.

There was a sharp two-mile descent to the finish, and then he was across the line. John had run marathon number two in a time of 4:48.

After a cup of tea and a quick stretch – no time for a shower – John, Margot, Dan and Terry hopped in the people carrier and headed for Heathrow.

But the Sunday traffic was hardly moving. The cars would move a couple of hundred yards and then stop again. The time to board the plane to Dublin was slipping away.

John began to lose hope. The treble, he thought, was not going to happen.

But Margot was not ready to accept defeat. She said

Finally, they got close. Margot works at Heathrow, and she knew a back way around. Had it not been for that – and had they not started the marathon an hour early that morning – the attempt would have been over. But John and Margot made their plane with a few minutes to spare.

In Dublin, John and Margot checked into their hotel around midnight. John realized that he’d had the same trainers on for 18 hours. He’d never even peeled them off his feet after the marathon.

The shower, he said, was “really nice.”

After five hours of sleep, he was up again to try marathon number three.

“By that stage, I could really hardly walk,”

He took another shower to try to loosen up.

“I’m just going to survive this,”

He started at the back of the field. He made it through the first half of the race. Then, as he started jogging, all of a sudden his legs loosened up. They started repairing themselves. He kept running. And he crossed the line in 5:02.

It was over. He’d done it – accomplished a feat many runners don’t have the courage to attempt.

But there was still reason for humility. At a pub after the race – proud, tired, filled with emotion – he ran into the first blind man ever to complete the treble. John found the accomplishment very moving.

All the travelling had made the treble difficult. And John had felt fatigue, pain and even discouragement. But he would do it all again.

“It’s one of the most amazing weekends I’ve ever had in my life,”