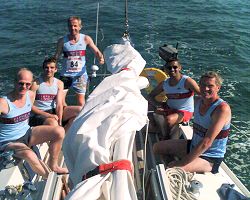 Farnham Runners have travelled “overseas” to compete recently, some of them taking up an opportunity to sail to the venue of the last of the season’s Hampshire Road League races organised by Ryde Harriers on the Isle of Wight.

Farnham Runners men stay in Division One for next season’s Hampshire Road Race League, while the ladies just miss promotion from Division Two.

Tying with Denmead Striders men on league points, the Farnham club had a lower race positions score and so finished in 7th place of the ten teams in the division. Their B team was 12th of 20 teams in the B division.

The ladies placed 3rd in Division Two at Brading and maintained their third place for the final tally.

Further a field John Applebee took an amazing 21 minutes from his first attempt last year in the 56-mile “Comrades Marathon” in South Africa. After months of rigorous training he completed the distance in 11 hours 18 minutes, even though this year the course was in the uphill direction. His goal is to raise as much money as possible for Leukaemia Research.

Malcolm Fitzsimmons also represented Farnham Runners abroad in a 10km race in Montana, U.S.A. where he finished in 44 minutes despite running at an altitude of 5000 feet over a hilly course.