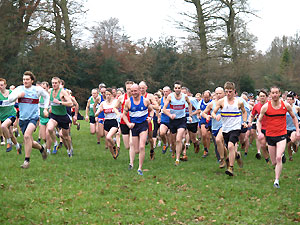 In action again the day after the very successful annual club dinner, nine men and eleven ladies battled it out over the notorious mud at Midhurst in the 4th round of the Today’s Runner Winter League cross-country series. At the end of the 4½ mile course an energy-sapping hill greets the runners when they have very little energy left to sap!

The consistent Dan Smith gained another top ten position (8th) with David Lloyd still getting stronger with every race (13th). Mud-loving Stuart Morgan made a last minute decision against a day’s cycling to support the team (18th), while Charles Ashby almost caught him after a glitch half way round (20th). Terry Steadman (66th) put in another strong performance to complete the team that came 4th of the seventeen in the league.

Andy Tweed was nudged out of the team this time (81st), while Don Melvin (96th) was delighted to be on the heels of Tim Cummins (91st), with John Applebee following in 156th.

Sarah Edson, now kitted out in new studs, showed her stamina and strength to finish an excellent 5th of the ladies field, narrowly behind Jane Georghiou who took 4th.

Jo Edson was disappointed with her 19th slot but this contribution gave the ladies a fine 2nd place. Lindsay Bamford was just one place behind (20th).

Combined mens’ and ladies’ results led to an excellent 2nd place overall on the day. Gone are the days, not long ago, when captains struggled to fill the team places!

For the first time the club’s annual dinner included an awards ceremony and was held at Farnham Maltings with music from the Schmooze Brothers. 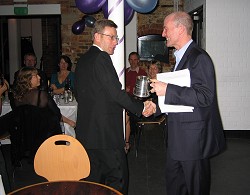 Graham Wilton (pictured) collected the Paul Charlton Memorial trophy for the best marathon time of 2005 for his run at Abingdon, where he broke the club’s V40 record by over 4 minutes.

Julie Russ is now the proud owner of the Club Handicap trophy, while the unsuspecting Tim Cummins and Helen Scullard were awarded the Herbie and Prince Memorial trophies respectively for improvement in the Alice Holt 10km race.

The new Steve Parker trophy for the person voted as contributing most to the club over the year went to John Applebee for his inspiration and encouragement to all runners. This trophy is to celebrate Steve Parker’s tremendous contribution to the development of the club under his recent chairmanship.

The members thanks go out to John Applebee and Charlie Gray for planning and organising the event and to Chairman Malcolm Fitzsimmons for presenting the awards. 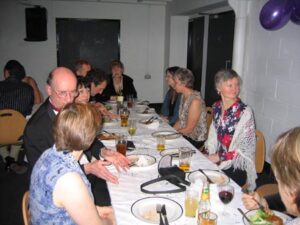 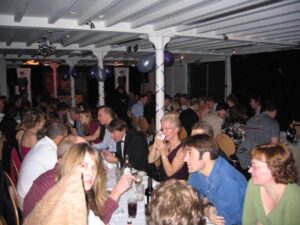 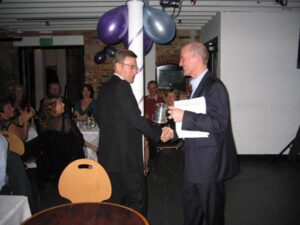 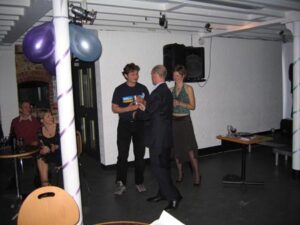 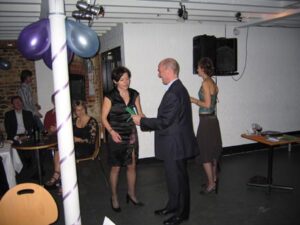 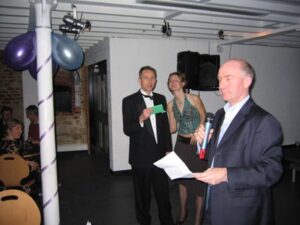 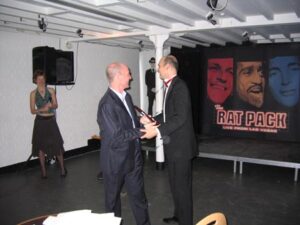