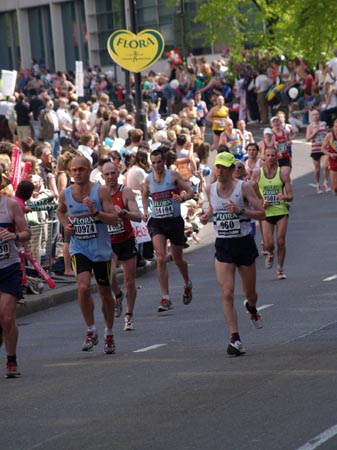 Nineteen Farnham Runners joined the record numbers completing the 27th London Marathon and between them they raised over £12,000 for charity. The months of training paid off and many achieved good times despite the very warm conditions. An enthusiastic bunch of friends and relations went along to cheer them on.

Although hoping for even quicker, in his first marathon Graham Russ achieved a superb result that placed him 11th in the junior M20 category. He was less than two minutes from the championship qualifying time, crossing the line in 2 hours 46minutes 38 seconds (all results are chip times). He was 263rd of over 36,000 finishers and raised £700 for Breast Cancer Care.

Graham Wilton placed 62nd among the M40 men in his 6th marathon and was only one minute from his personal best despite the heat. He finished in 2.49.47 (348th) and his £1,400 sponsorship will be split between Cancer Research and the Chiltern Multiple Sclerosis Centre.

Dan Smith (850th) will be contemplating where those two seconds went to for a very long time as he made the finish in 3.00.02.

Ian Carley took a huge chunk off his previous best for an excellent 3.09.35 and his efforts have helped the Beacon Appeal for the hospice in Guildford to the tune of £400.

Charles Ashby’s training went well for his fifth marathon and he gained a personal best of 3.11.57 despite a slow first mile due to sheer numbers ahead.

In his 13th consecutive London marathon Vince Crowley soaked up the atmosphere and chatted to supporters along the way, yet still managed a very respectable 3.40.44 and raised money for Farnham’s Cheshire Home, Bell’s Piece.
After minimal preparation Steve Murphy had to settle for 4.16.20, over an hour longer than his best London time.

Tim Cummins found the conditions to his liking and made good use of his club place to post a personal best by eleven minutes and raise £250 for Leukaemia Research (4.22.09).

Emma Doven took half an hour from her first attempt at the distance clocking 4.27.30 and her £1,500 sponsorship will go to Ability Bow.

Julie Russ, who enjoyed the race despite the heat, clocked 4.29.30 (150th W50) with £1,000 going to Cancer Research.
Richard Sheppard was delighted with his achievement of 4.34.13 since taking up running only 13 months ago (£2,000 to Tommy’s the baby charity). Another first time marathoner, Richard Adolph raised funds for the Druk White Lotus School in Ladakh crossing the line in 4.36.49.