HRRL Gosport Half and British and Irish Masters International Cross-country 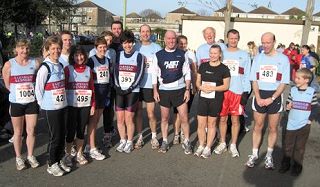 Three Farnham ladies were among the prizewinners at the Gosport Half marathon. Their fine results put the team second in the top flight of the Hampshire Road Race League. The men also had an excellent set of results, the “A” team taking 7th slot in their very competitive first Division. All thirty-five Farnham competitors took part with enthusiasm, many achieving personal best times and others tackling the challenging distance for the first time.

For the second year first Farnham Runner home was Graham Wilton in an excellent one hour twenty minutes 19 seconds. This gave him 40th place of 847 finishers (9th M40). Steve Kitney and Charles Ashby spurred each other on to personal best performances by a massive 3 ½ and 2 ½ minutes respectively, both recording 1.21.36 (51st/52nd) and Ashby taking 12th in the M40 category. Much to the embarrassment of the club’s supporters they celebrated their joint success by linking hands as they skipped along the finishing straight! Ian Carley (1.25.47, 96th) won the battle for the final “A” team slot crossing the line a few paces ahead of Andy Eakins (1.25.58, 99th) who squeezed into the top 100.

Sarah Edson’s superb run in 1.28.18, over a minute quicker than her recent previous best, placed her an impressive 10th lady and she was rewarded with one of the ladies’ prizes. Jane Georghiou’s time of 1.31.04 (17th lady) gave her first in the W50-59 category and should put her second in the UK W55 rankings for the distance for 2007. Angela Epps took another considerable chunk from her personal best (1.32.25) to claim 4th W40 and 20th lady’s position. She now lies an impressive third in the ladies individual table. The next trio also gained very useful results, to place 3rd of 27 “B” teams. They were led in by Frances Britain with another impressive personal best (1.41.40) with Lindsay Bamford (1.46.06) and Gemma Mitchell (1.50.07) following. 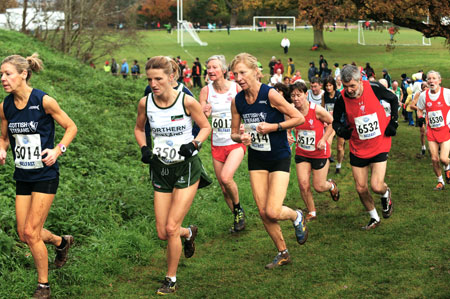 Jane Georghiou was selected for a four-strong England W55 team for the annual British and Irish Masters International cross-country held in Belfast this year, in the grounds of Stormont Castle.

She gained her first individual medal finishing third in this category over the 6km course, only 11 seconds adrift of the first W55, helping England to team gold.