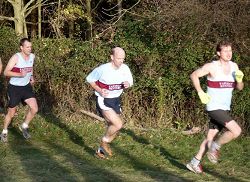 The cross-country season is now in full swing with a double weekend of racing for Farnham Runners, some enthusiasts enjoying the challenge and camaraderie of both events. Consistency paid off to help the club to good results, most notably a joint first place in the first round of the Today’s Runner Winter League.

On Saturday a club record of twelve men battled for the five scoring places at Goodwood, the venue for the second Hampshire league cross-country. Charles Ashby led them in and recorded a time of 34 minutes 21 seconds over the hilly 9km course, his 109th place showing the competitiveness of the league. Steve Kitney gained on the last lap to finish just behind in 34.33 (114th). Bob Brimicombe started steadily and overtook all the way round for an impressive 35.48 (133rd), pushing Andy Eakins into fourth (35.51, 135th). Fifth scorer was Colin Addison (36.37, 151st).

This gained the Farnham men fifth place in Division Two, moving the team up to 4th for the series so far.

Winning lady of the recent Puma Urban Escape 10km Trail race, Angela Epps, showed the value of her recent training to take a new personal best of 35th and an excellent time of 24.24 in the 6km ladies race. First W55 in the Great South ten miler, Jane Georghiou followed in 24.46 (41st) with Lindsay Bamford completing the club score in 75th (26.44). Kim Mepsted (29.37, 97th) and Victoria Shaw provided back-up to the team that placed 11th with 5th slot in the veterans’ category. 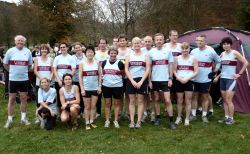 The next day twenty-nine Farnham Runners assembled at Queen Elizabeth Country Park for the first round of the Today’s Runner Winter League. Charles Ashby was delighted to achieve an excellent double first home for the club in ninth place. Mark Taylor had to be content with 20th while Steve Kitney and Andy Eakins recorded valuable 25th and 29th respectively on their debuts in this league. Again Colin Addison was fifth scorer in 48th, helping the men’s team to an excellent 2nd slot. Andy Tweed followed in 70th with Tim Cummins (75th, PB) and Mike Ashworth (80th on debut) both pleased with their performances.

The combined men and ladies’ tally of 5 points put Farnham Runners at the top of the table of 18 clubs along with Stubbington Green Runners.

Other results at Queen Elizabeth Country Park, some affected by confusion over the route: