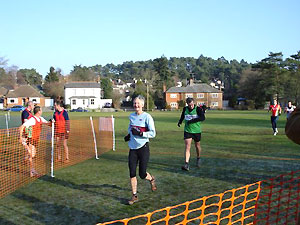 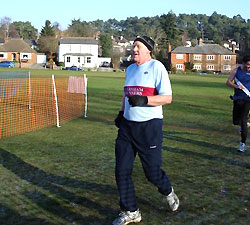 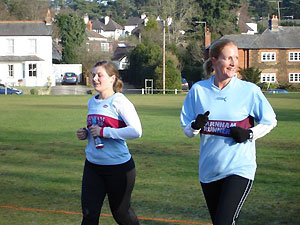 Farnham Runners ended the racing year on a high point with a double victory in the Today’s Runner Winter League cross-country that they staged from the Bourne Green on Sunday. Not only did the men’s and ladies teams both come first, assuring them of top slot out overall of the 18 participating clubs, but the club could also boast the highest number of both men and lady runners. A huge turn out of members, relatives and friends worked together to organise and marshal the race, as well as provide food afterwards (including a sumptious display of cakes).

The renowned hills of the Farnham 4.8 mile course are also a draw for cross-country enthusiasts and almost 280 assembled at the start for instructions of race director, Charles Ashby. Craig Berryman of Havant AC was first to finish in an excellent 27mins.32secs with Andy Simpson of Stubbington Green Runners (28.00) just winning the battle for second place over Jason Harris of Farnham Triathlon Club (28.13).

It was the close packed finishing of the Farnham Runners teams that put them top. The men’s score for the first five runners home was only 83, although Stubbington Green Runners came close on 86 with Hart Road Runners third on 126. Michael Rix led them in (11th) followed by Andy Eakins (13th), Mark Taylor (15th), Steve Kitney (19th) and Bob Brimicombe (25th).

Sarah Edson headed the ladies’ team with an impressive fourth place out of 91 ladies. Angela Epps snatched a very valuable 7th in this increasingly competitive series while Jane Georghiou (12th) completed the total of 23 points, again just 3 ahead of the second team, this time Midhurst Milers, with Liss Runners 3rd.